Meet the Head of Syrian Kurds' Women Fighters, Who Kill and Humiliate Daesh 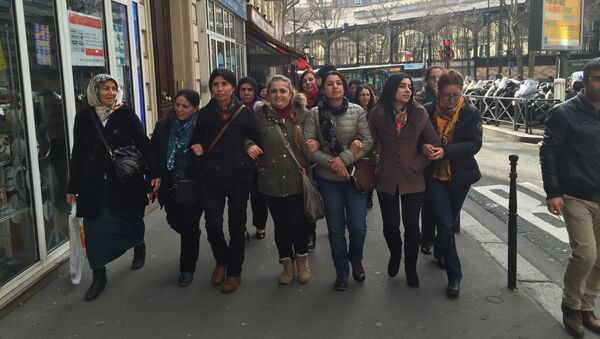 Sputnik caught up with the leader of the Syrian Kurdish women's brigade, Nesrîn Abdalla, to ask her about the group's goals and its struggle against Daesh.

The Syrian Kurds' Women's Protection Units (YPJ) fighting against Daesh have for the past several years attracted the world's attention.

Sputnik caught up with one of the unit commanders, Nesrîn Abdalla, when she was passing through Paris, France. Despite being a journalist by education, she joined the group in 2013 and rose through the ranks to become a unit commander.

"It's a kind of tradition among the Kurds," she explained to Sputnik. "There were 28 revolts. And every time a woman rose, and each time they did it either to fight with the enemy, or just to protect themselves."

Some 45 percent of Kurdish forces are composed of women, and the YPJ is a separate group from the People's Protection Units (YPG), which is composed of men.

Fighting Oppression, at Home and on the Battlefield

"Our task is not only to fight Daesh. Our defense battalion was created before Daesh attacks, since we live in a feudal society, where every day women's rights are attacked, by suppression and rape <…> So we had to organize ourselves properly in order to deal with the feudal thinking," Abdalla told Sputnik.

Real Life GI Janes: Kurdish Women Take the Fight to Daesh
"Until now, armies were created exclusively by men with patriarchal thinking, so they had only two tasks: to defend and win power. But we are an army of women, and that's never happened before, there are no others like that. We do this not just to protect ourselves, but also to change the way of thinking in the army, not only to gain power, but to change society, to develop it," she added.

When Syria's unrest began in 2011, women already took part in the protection forces, but in far smaller numbers, she said, until a 2013 conference led to the creation of a women's battalion.

The YPG and YPJ are linked, but the leadership, management and command are completely separate, she added.

Standing Up to Daesh

The YPJ is not a Kurds-only force, either, as it features both Arab and non-Syrian women.

"For example, the battalion has Arab women and they fight alongside us, but have their own pecularities, but their goal is to create a separate battalion in the future; it makes sense not only to join us, but also to fight for their rights," Abdalla told Sputnik.

Syrian Women Unite to Save Christian Towns From Daesh
She added that despite its claim to being a religious organization, she does not see Daesh as connected to Muslims or Islam. Daesh, she said, uses religion, together with fear, as a recruiting tool.

She also noted that at first, Daesh fighters killed in battle were found with spoons and keys. A captured fighter told them that "the key of the door to heaven, and the spoon is necessary to eat with the Prophet Muhammad."

Soon, though, things began to change.

"We first heard them on the walkie-talkies. We heard them talking about the fact that if they are killed by a woman, they will not go to heaven. And then, because there were really a lot of melee fights between the YPJ and Daesh, and because they had more and more losses, they began to think differently, saying that those who have been killed by a woman should be burned because they cannot bury the bodies as the land is sacred. So they quickly took a fatwa to settle the matter," Abdalla told Sputnik.

As Syrian-Russian Coalition Advances, Cynics Prepare for 'Moscow's Defeat'
A Warning for Women Recruited by Daesh

Abdallah also had a message for Western women who travel to Iraq or Syria to join Daesh. Daesh, she says, is an enemy of women, which treats women like objects, and for whom polygamy, gang rapes, murder of women and harems are all permitted.

"This is very dangerous, especially for Western women who have decided to join Daesh. They want to be their wives, to join with them in a religious marriage, but in the end, this only satisfies their instincts. This is dangerous and demeaning," Abdalla told Sputnik.

She added that while joining Daesh may seem like an adventure, it is a point of no return for women.

"Imagine a woman who is forced to serve the needs of 10 men a night. Even an animal would not be able to do so, even an animal's body simply would not sustain it. No woman can not be a flesh robot. But these women are there and even if they want to leave, they can not, because the  price of a return ticket is death," she added.

As for Daesh itself, she called the group an "army of dead men," who have no goals beyond dying.

She added that despite the progress made by the YPJ, there is still a long way to go to defeat Daesh because "There are forces behind Daesh. If we want to eliminate Daesh, we need to look at who their leaders are."