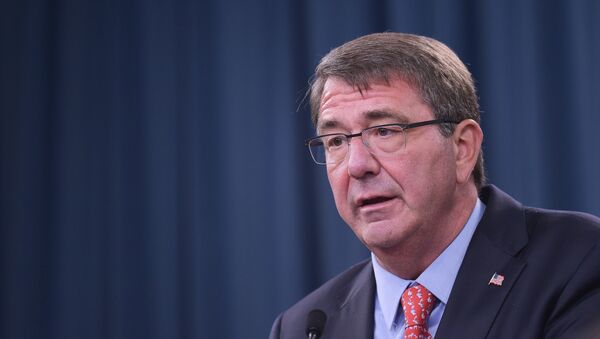 In recent statements by US Secretary of Defense Ashton Carter, the US-led coalition against Daesh (Islamic State/ISIL) is less a coalition and more a disparate group following their own interests, suggesting that allies are not pulling their fair share of the weight in the ongoing and costly war.

The comments by Carter, at a public forum in Washington on Tuesday, come prior to a meeting of anti-Daesh coalition leaders taking place in Belgium next week.

"A lot of them are […] making considerable contributions to this, but some of them are not. And you really have to look at this — this is a fight of civilization […] for its own survival," Carter asserted. "And we need everybody, and that's all the Europeans — the Gulf States, which aren't doing [enough], Turkey, which is right there on the border. So, there are a lot that need to make more contributions."

To 'Degrade and Destroy': Hidden Flaws in Pentagon's Syria Strategy
Carter has repeatedly voiced concern and disappointment regarding the military performance of Saudi Arabia, Bahrain, the United Arab Emirates and Turkey in fighting factions of Daesh based in Syria. In December, Carter stressed that the contribution of Turkey, primarily because of its location, is crucial for the coalition to succeed, and that Ankara "must do more to protect its often porous border" with Syria.

Control of the Turkish-Syrian border has been a key issue, as terrorists frequently travel unmolested across the frontier.

Carter detailed issues for the upcoming meeting in Brussels, intending to gather defense ministers to give them the Pentagon's plans for coalition next steps in Syria.

"What I'm going to do with them is to say, all right, here are all the capabilities that are needed — boots on the ground, airplanes in the air, more prosaic things, logistics, bridging, training — training for those police that are going to patrol cities like they're patrolling Ramadi now once the cities are retaken." Carter said.

"The United States will lead this and we're determined, but other people have to do their part," he declared. "Civilization has to fight for itself."

The Pentagon has spent some $5.4 billion between August 8, 2014, when the anti-Daesh campaign was initiated, through December 21, 2015, according to the Department of Defense.

Despite carrying out thousands of sorties, airstrikes by the US-led coalition have had little effect on the extremist group's infrastructure. Monitoring groups have, however, reported a growing number of civilian casualties.