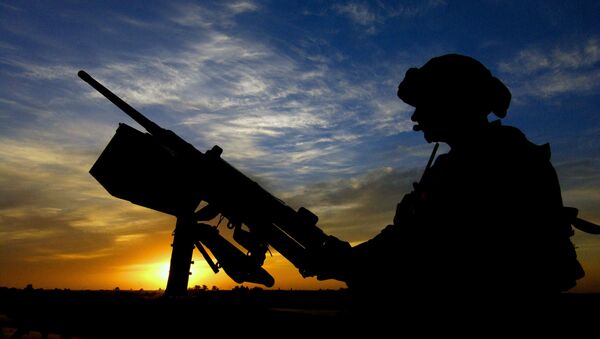 © Flickr / Expert Infantry
Subscribe
International
India
Africa
Since the 'war on terror' began 15 years ago, the number of mercenaries hired by private military and security companies and operating on the front lines in the Middle East and Africa has exploded tremendously, a new report by War on Want reveals.

The report, 'Mercenaries Unleashed: The brave new world of private military and security companies', examines the extensive and far-reaching billion dollar private industry, which the UK-based movement War on Want says is dominated by British companies.

"Private military contractors ran amok in Iraq and Afghanistan, leaving a trail of human rights abuses in their wake. Now we are seeing the alarming rise of mercenaries fighting on the front line in conflict zones across the world: it is the return of the 'Dogs of War,' " John Hilary, Executive Director at War on Want told Sputnik.

Private military and security companies (PMSCs) have been exploiting conflict and instability in war-torn regions whilst making gargantuan profits for the least 15 years — and they've only increased in numbers. According to the report, hundreds of new companies have been established in the last few years alone.

"The UK is an important hub for the PMSC industry. At the height of the occupation, around 60 British companies operated in Iraq. Now there are hundreds of British PMSCs operating in areas of conflict around the globe, working to secure government and corporate presence against a range of 'threats,' " the report states.

Some of the corporate names mentioned in the War on Want report on private mercenaries are all too familiar. The likes of G4S, Aegis Defense Services Control Risks and Olive Group are among the many leading British PMSCs, who have picked up some very large contracts in the last 15 years.

"At the heart of the industry is a revolving door between PMSCs, military, intelligence and corporate worlds, with the interests of these sectors closely intertwined," says the report.

War on Want found that some of the smaller PMSCs are entirely made up of former military personnel whilst larger organizations have ex-military in key posts. And as the CEO of Aegis Defense Services and former Armored Brigade Commander, Graham Binns, once said: "In the world of business, ex-military people have got a lot to offer — I certainly hope so anyway."

Britain Headed for 'Very Embarrassing' Court Case Over Saudi Arms Sales
The report says the British government has chosen to turn a blind eye and allow the PMSCs to regulate themselves which has allowed them to increasingly exploit legal loopholes, not just on land, but also in the maritime industry. Major oil corporations interested in asset protection at sea are a popular hit with UK PMSCs.

This isn't the first time War on Want have addressed PMSCs' activities in the region. In 2006, three years after the invasion of Iraq, the UK-based charity published a groundbreaking report on the role private mercenaries played in the occupation, political destabilization and human rights abuses in the country.

"At that time, with the companies operating in a complete legal vacuum, we made an urgent appeal for a ban on PMSCs in conflict zones, strict public scrutiny requirements and an end to the revolving door between senior defense and security officials and the industry," John Hilary said.

And after Iraq, British PMSCs really took off. Andy Bearpark, the Director General of the British Association of Private Security Companies, said:

"In Iraq in 2003 and 2004 money was basically free. That meant contracts were being let for ridiculous amounts of money — millions and millions of dollars of contracts being pumped into the industry. The industry exploded in terms of the volume of business on the back of Iraq."

Perhaps the biggest market for British PMSCs in Iraq is the provision of security for private corporations seeking to invest in the country — mainly the oil and gas industry, with the likes of BP, Royal Dutch Shell, ExxonMobil and others using private mercenary services.

Companies like Aegis Defence Services for instance, see Iraq as their largest area of business where they've been "operating in support of the oil and gas sector for over two years".

These services include "a full security service including Command, Control and Information, Mobile, and Static Security Services on major oilfields for international oil companies as well as oil service providers," as well as intelligence operations to draw up "personality profiles," examine "legal and regulatory obstacles" and look "into the very heart of the Iraqi political and commercial establishment," according to War on Want.

Iraq, however, isn't the only country to witness a sharp increase in private mercenary activities — northern and western Africa has equally become a hotspot for British, as well as international PMSCs.

Aegis Defence Services says it operates in 18 countries across the continent — these include Angola, Niger, Nigeria, the Democratic Republic of Congo and Central African Republic. G4S, on the other hand, has an annual turnover of around US$725 million in the region.

After the western-led invasion of Libya and toppling of its leader Muammar Gaddafi in 2011, the country also became a popular PMSC destination. Multinationals were interested in the country's oil and gas and the PMSCs were ready to, as an unnamed PMSC executive put it, "facilitate the re-entry of clients in Libya".

And the British company Trango Special Projects actually advertised its services on its website by saying "are you and your business ready to return to Libya?" just days after Gaddafi's death.

'Dogs of War' Come From Everywhere

Of course, it isn't just the British offering 'guns for hire'. Mercenary 'dogs of war' from almost everywhere in the world have been active in the Middle East and Africa since the 'war on terror'.

South African mercenaries, for example, hired by the Nigerian army, are fighting the Islamist group Boko Haram. The US PMSC Blackwater (now known as Academi after changing its name) has hundreds of Colombians fighting alongside Saudi Arabia in Yemen.

Whilst we know that PMCSs have been around for years, the sheer increase in their numbers and the exploitation of political instabilities, as well as allegations of human rights abuses are a worrying trend which calls for more regulation and accountability.

"For too long this murky world of guns for hire has been allowed to grow unchecked. In letting the industry regulate itself, the government has failed: only binding regulation will do. The time has come to ban these companies from operating in conflict zones and end the privatization of war," John Hilary, Executive Director at War on Want told Sputnik.

War on Want began its campaign for more regulation of PMSCs ten years ago, calling for a complete ban on private mercenaries in conflict zones.

In 2010, they successfully facilitated the UN Human Rights Council debate of the first draft of a possible Convention on Private Military and Security Companies. The draft has since been reviewed and revised by an intergovernmental working group. The group's analysis of PMSCs will be presented to the UN General Assembly in 2016. Until then, the 'dogs' will keep barking.