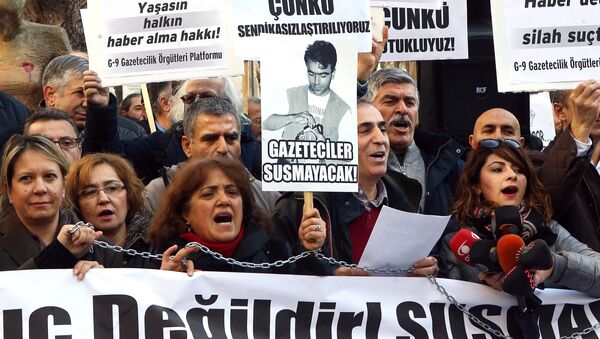 Commenting on the Turkish government's campaign to demonize former Deputy Prime Minister Bulent Arinc over his criticisms of the Justice and Development Party (AKP) and its leadership, former AKP Minister of Culture and Tourism Ertugrul Gunay warned that Turkey is showing worrying signs of a backslide into dictatorship.

Last Friday, recently retired AKP politician Bulent Arinc, the longtime deputy prime minister and parliament speaker, appeared on CNN Turk, where he proceeded to criticize the government on issues ranging from the failure of the peace process in the south of the country, to the witch hunt against the government's opponents, to free speech more broadly, and the campaign to demonize all of President Recep Tayyip Erdogan's enemies, real or imagined.

Arinc's comments raised a firestorm of criticism from die-hard AKP supporters, government officials, and the government-aligned media. In particular, pro-government forces were angered by the retired politician's statements on the February 2015 Dolmabahce Agreement between the AKP government and the pro-Kurdish Peoples' Democratic Party, aimed at moving the peace process between Ankara and the outlawed Kurdistan Workers Party (PKK) forward.

'Extremely Shocking': UN Urges Turkey to Investigate Shooting of Civilians
Last summer, Erdogan condemned the deal, suggesting that that the government could not negotiate with a party, and adding that he knew nothing about it. However, speaking to CNN Turk, Arinc revealed that Erdogan knew about the details of the agreement from the beginning, even if he was not involved in negotiations directly.

In the veteran politician's view, Erdogan's statements about 'not knowing' amounted to a political bluff, used to justify the beginning of the military operation against the PKK in July.

With the Turkish government, the AKP and pro-government media rushing to condemn Arinc, Ertugrul Gunay, the former minister of culture and tourism, stepped out to defend him. Interviewed by Sputnik Turkey, Gunray warned that the intense criticism against an AKP loyalist like Arinc, together with other attempts by the government to silence free speech, are a worrying trend, one which threatens the country's democracy.

Erdogan's Crackdown on Freedom of Speech Turns Into All-Out Witch-Hunt
"Turkish media is now under severe pressure from the authorities, with the agenda shaped by the government. Mr. Arinc's statements were actually very multifaceted, and covered a number of acute problems facing Turkish society today. Each of these issues needs to be considered separately."

"Today," Gunay noted, "everyone seems to have forgotten that just last year, while he was in office [as deputy prime minister], Arinc raised questions about the Consensus at Dolmabahce. Why, at that time, did it not cause such a commotion within the cabinet of ministers, and from the president?"

"Some wondered why [Arinc] felt the need to talk about these issues right now. I personally believe that there is a serious need to do so. In a situation where Turkey essentially faces a quiet form of martial law, they can and should be discussed. Look at what is happening in the country. Every day, we hear of new trials and proceedings. Journalists are being arrested for reporting on events; judges are arrested for their decisions, and prosecutors –for doing their job."

"How can one talk about the formation of a healthy, free society, and the establishment of a modern constitution, if the country doesn't have a free press?", the former official complained.

"In an environment where those who express views which different from the political mainstream are declared criminals and traitors, it is impossible to create a Basic Law, based on mutual respect for all members of society, the desire for dialogue and problem solving by peaceful means. To do this, it would first be necessary to prepare the ground for a free, civilized atmosphere for dialogue in society," Gunay emphasized.