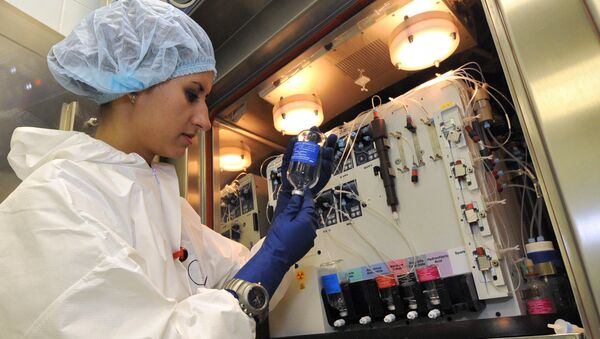 © Sputnik / Aleksandr Kondratuk
/
Go to the photo bank
Subscribe
Eurasian Cancer Foundation (AECF) chief Subramanian Somasundaram said that Russia can leave behind the West in 10-15 years and become a model for the rest of the world in cancer treatment.

"We can improve survival rates… We can leave behind the West in 10-15 years and become a model for the rest of the world. These are not just words and we are not afraid of work," Somasundaram said at a press conference at the Rossiya Segodnya International Press Center in Moscow.

But Subramanian Somasundaram said that Russia is experiencing multiple problems in the detection and treatment of cancer nowadays.

"Late disease detection, a low level of information provision, a lack of research projects initiated by researchers themselves… Data shows how much Russia and the CIS lag behind the West [in diagnosing cancer]," Somasundaram said.

Eurasian Federation of Oncology to Set Anti-Cancer Foundation in Russia
Doctors' and oncologists' salaries in Russia remain low, he added.

The prevalence of low qualified doctors is one of the main obstacles to efficient cancer treatment in Russia, according to Somasundaram.

"If we teach doctors specializing in non-oncology fields the basic elements of diagnosing cancer, we will increase detection rates," he said.

The EACF was established earlier on Wednesday by the Eurasian Federation of Oncology (EAFO). The EACF aims to promote early cancer detection, the adoption of complex approaches to cancer treatment and the implementation of advanced practices in the spheres of cancer prevention, detection and treatment.

According to the World Health Organization (WHO), in 2014 at least 16 percent of the some 2.1 million total deaths in Russia were estimated to be caused by cancer.

000000
Popular comments
GREAT!! On everything PATENTS.. And keep them many decades, Like MICROSOFT.
cast235
3 February 2016, 17:24 GMT
000000
Last week i was speaking with a friend mine that lives in Moscow. She is very worried because het daugther want to enter in Law Moscow University , in spite her daugther is a good student she told me that there are lots of corruption on the teachers that correct the tests and she is afraid that once she has no money to pay her daugther don t enter even if she is a good student. If this is true Mr. Putin most act against that corruption that allow nuls to enter at expenses of good students.