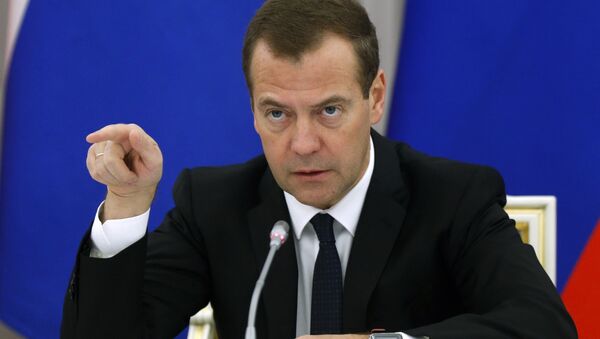 "In the course of my talks with everyone I met recently, with the EU leadership, with various state and government leaders, no-one told me that the sanctions are a positive step, that they yield a positive result. On the contrary, everyone says that it is bad, but the issue drags on nevertheless," Medvedev said during a meeting with Austrian Vice-Chancellor Reinhold Mitterlehner.

Nord Stream-2 Will 'Undermine EU Sanctions Regime' Against Russia
Russia was not the initiating side in imposing the sanctions, Medvedev emphasized, adding that it is up to the European Union to take the next step.

The European Union's economic relations with Russia deteriorated sharply due to the 2014 Ukrainian conflict, as the bloc imposed a series of economic sanctions against Moscow over its alleged interference in Kiev's domestic affairs.

Russia has repeatedly denied involvement in the conflict, stressing the importance of upholding the Minsk peace protocols.