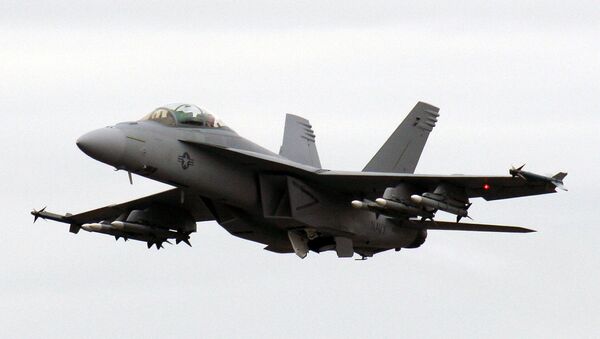 The US aerospace and defense company Boeing is deliberating manufacturing its F/A18 Super Hornet multirole fighters in India as part of the Make in India initiative, CEO Dennis Muilenburg said as quoted by Indian media on Wednesday.

NEW DELHI (Sputnik) – The  CEO categorized Indian Make — a domestic manufacturing campaign launched in 2014, as an "enabler" aligned with the company’s strategy.

"We are taking a hard look at the opportunity for the F18 fighter jet as an area where we can build industrial capacity, supply chain partnerships, technical depth, design and manufacturing capability in India," The Economic Times quoted Muilenburg as saying in New Delhi on Tuesday.

The F/A-18 took part in the Indian government’s procurement program to replace India’s aging fleet, but lost out to the French Rafale fighters. The $9 billion Rafale deal for 36 jets has been stalled for months because of price disputes, creating an opportunity for Boeing, according to the publication.

"Our intent here is to build an industrial framework for the long run that builds on the aerospace investments being made not only by programme by programme, but also by long-term industrial capacity that is globally competitive," Muilenburg stressed.

Boeing describes the F/A-18 twin-engine, supersonic, all weather jet as capable of landing and taking off from an aircraft carrier.