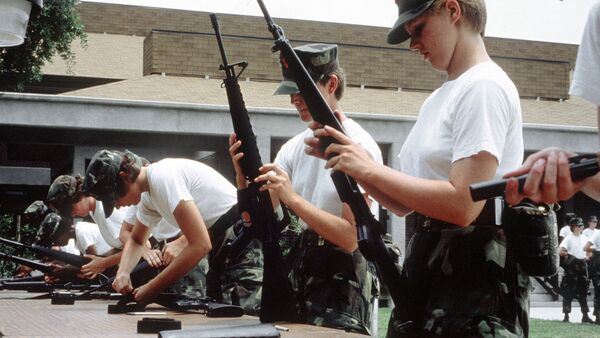 © Flickr / Expert Infantry
Subscribe
On Tuesday, US top military leaders said that women should be required to register for the draft following the opening of all combat operations to women by the Department of Defense.

The US military opened combat jobs to women after a review of longstanding Pentagon policy, Secretary of Defense Ashton Carter announced early in December 2015. The change was made across the "entire force" despite recommendations by the Marine Corps against the move.

"Every American who's physically qualified should register for the draft," General Robert Neller, the Marine Corps commandant, said during the Senate Armed Services Committee hearing examining women's integration into combat.

US Army chief General Mark Milley echoed Neller, saying that "all eligible and qualified men and women" must discharge their duty to their country.

US Opens All Combat Operations to Women - Secretary of Defense
Democratic Senator Claire McCaskill, backing the statements, said, "Part of me believes that asking women to register as we ask men to register would maybe, possibly open up more recruits as women began to think about, 'Well, the military is an option for me,' I think it's the right thing going forward."

Not everyone in the US military is excited about women working alongside men in combat jobs. Navy Secretary Ray Mabus and Under Secretary of the Army Patrick Murphy expressed a reluctance to support the move, adding that the issue requires "a national debate."

"It should be a national debate, and I encourage the legislative body to look at that," Murphy said.

US female service members had been prohibited from serving in combat positions beginning in 1994, and were rarely considered for front-line duty prior to that time.

000000
Popular comments
Well at least the US Military will be able to ***k each other , rather than the men women and children in far off lands that most Americans cannot identify on a map.

FlorianGeyer
3 February 2016, 02:19 GMT
000000
The Russian Federation, Israel, Ghana and several other nations enjoy the availability of women for combat duty in times of war. There is no reason they cannot fight except obsolete Victorian priggishness. Russia in particular enjoys a distinguished record of female combat aviators, of which illustrious number I view as my favourite Squadron Leader Nadezhda Fedutenko, fearless defender of the hero-city Leningrad. Canada's CF-18 dive bomber squadrons interestingly enough are staffed by many daughters of Russian immigrants and as such have won top honours at several competitions during the Cold Lake annual international air combat faceoffs.