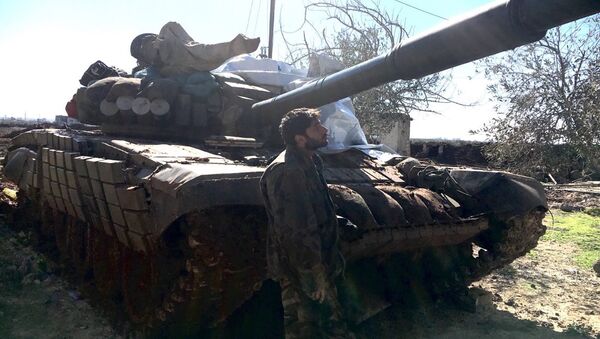 Two key supply lines of the terrorist group Daesh have reportedly been cut by the Syrian Army in the northern area of Aleppo Province.

"The Masqan-Aleppo and Haras-Al-Bab roads used by the ISIL terrorists as two main supplying routes were cut in the attacks of the Syrian fighter jets and the army's artillery units," the Iranian news agency FARS quoted army sources as saying. 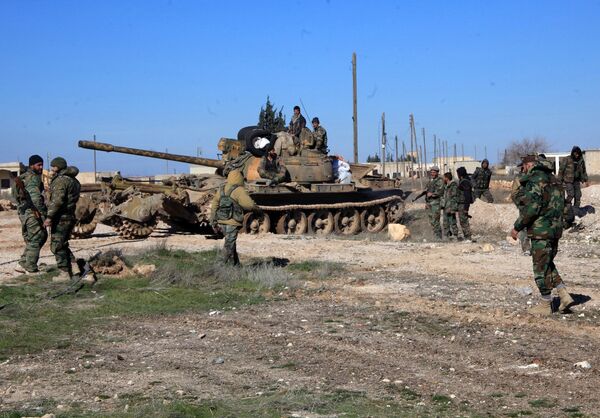 Syrian pro-government troops hold positions in the Syrian town of Ain al-Hanash near l-Bab in Aleppo's eastern countryside on January 26, 2015 as regime forces have recaptured the area from Islamist jihadists
© AFP 2022 / GEORGES OURFALIAN

The developments came after the Syrian troops and the NDF reportedly won back another strategic village in Aleppo Province's northern area, killing scores of militants.

Many more terrorists were wounded after the Syrian forces seized back the village of Tal Jabin located about three kilometers from the town of Bashkoy in Aleppo Province.

In a separate development late last week, the Syrian Army continued its offensive against Daesh terrorists in the eastern parts of Aleppo, seizing full control over another strategic height after heavy fighting with the militants.

Also, the army managed to gain control over a spate of Daesh checkpoints based near Aleppo's thermal power plant.

Street Warfare: Syrian Army Obliterates Jihadists in City of Aleppo
Earlier, the Syrian forces clashed with militant groups in three neighborhoods of the city of Aleppo, in fighting that left dozens of militants killed and wounded.

The sources said that the army attacked "the militant groups' strongholds in the neighborhoods of al-Sheikh Saeed, al-Salihin and Bani Zeid."

Adding to the Syrian Army's anti-terror effort is Russia's ongoing air campaign, which was launched on September 30, when more than fifty Russian warplanes, including Su-24M, Su-25 and Su-34 jets, commenced precision airstrikes on Daesh and Al-Nusra Front targets in Syria at the behest of Syrian President Bashar Assad.