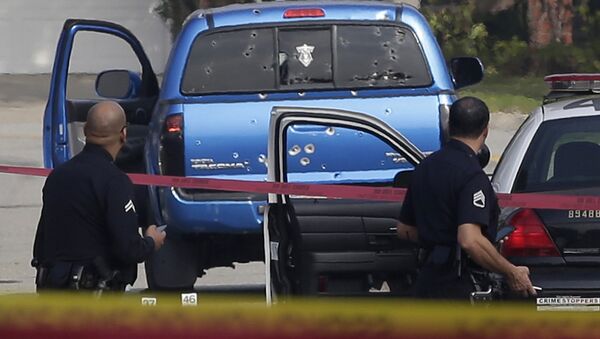 On February 7, 2013, mother and daughter duo Emma Hernandez, 71, and Margie Carranza, 47 were delivering Los Angeles Times newspapers at around 5:00 AM when officers mistook their light blue Toyota Tacoma pickup truck for a Nissan Titan pickup that Dorner was reportedly driving.

Hernandez was shot twice, in the lower back and in the scapula. Carranza was severely cut by glass shards from broken windows in the hail of bullets.

Dorner had killed two citizens and two police officers during a rampage after being fired from his job, which he believed happened because he reported the brutality of a co-worker. Following the killing spree, a manifesto by the former police officer was discovered, detailing his perception of corruption within the department.

No Charges for Cop Who Killed 12-Year-Old Ohio Boy Tamir Rice
Police believed that Dorner would target the home of Captain Justin Eisenberg, and officers were parked outside his home on the morning of the incident. Hernandez and Carranza passed by delivering newspapers, and, as they threw a paper onto a driveway, eight officers conducting a stakeout opened fire. A total of 103 bullets were fired, hitting seven nearby homes and nine other vehicles.

The women sued the City of Los Angeles and the Los Angeles Police Department, and received a $4.2 million settlement.

Blackie
18 February 2016, 10:22 GMT1
000000
If I were the Chief of Police in this matter, I would assign every officer involved in this fracas to forty hours a week at the gun shooting range. After two weeks of this, I would involve them to another two weeks of live fire training and without pay, If they can shoot 100 rounds into a vehicle as large as this one and miss both women, they weren't trying or they weren't trained. And one of them is 71-y/o!? What were they aiming at, the Classifieds!? Out of respect for both women, they can be thankful that they had a bed of papers to absorb the bullets instead of a bed of eggs. And someone IS going to get a new truck.
marcanhalt
3 February 2016, 03:36 GMT
000000
Newsfeed
0
New firstOld first
loader
LIVE
Заголовок открываемого материала
Access to the chat has been blocked for violating the rules . You will be able to participate again through:∞. If you do not agree with the blocking, please use the feedback form
The discussion is closed. You can participate in the discussion within 24 hours after the publication of the article.
To participate in the discussion
log in or register
loader
Chats
Заголовок открываемого материала
Worldwide
InternationalEnglishEnglishMundoEspañolSpanish
Europe
DeutschlandDeutschGermanFranceFrançaisFrenchΕλλάδαΕλληνικάGreekItaliaItalianoItalianČeská republikaČeštinaCzechPolskaPolskiPolishСрбиjаСрпскиSerbianLatvijaLatviešuLatvianLietuvaLietuviųLithuanianMoldovaMoldoveneascăMoldavianБеларусьБеларускiBelarusian
Transcaucasia
ԱրմենիաՀայերենArmenianАҧсныАҧсышәалаAbkhazХуссар ИрыстонИронауОssetianსაქართველოქართულიGeorgianAzərbaycanАzərbaycancaAzerbaijani
Middle East
Sputnik عربيArabicArabicTürkiyeTürkçeTurkishSputnik ایرانPersianPersianSputnik افغانستانDariDari
Central Asia
ҚазақстанҚазақ тіліKazakhКыргызстанКыргызчаKyrgyzOʻzbekistonЎзбекчаUzbekТоҷикистонТоҷикӣTajik
East & Southeast Asia
Việt NamTiếng ViệtVietnamese日本日本語Japanese俄罗斯卫星通讯社中文（简体）Chinese (simplified)俄罗斯卫星通讯社中文（繁体）Chinese (traditional)
South America
BrasilPortuguêsPortuguese
NewsfeedBreaking
18:33 GMTWhite House: Biden Hopeful Call With Macron Step to Return US-French Relations to Normal
18:25 GMTFive Held in India’s Karnataka for Asking Dalit Family to Pay Fine After Entering Temple
18:14 GMTFormer Treasury Secretaries Urge That US Debt Limit be Raised 'Without Delay'
18:07 GMTNo Genies in Sight: 'Well of Hell' Sinkhole of Yemen Explored by Cavers
17:42 GMTSaudi King Tells UN General Assembly Yemen's Houthis Reject Peaceful Solution to Conflict
17:35 GMTMessi Was 'Tyrant' to Barcelona Teammates in Training, Claims Manager Ronald Koeman
17:27 GMTInt'l Support Group for Lebanon Urges Government to Take Active Measures to Ease Crisis
17:07 GMTIndia: Anti-Terrorist Squad Arrests Islamic Cleric Over Religious Conversion Charge
17:01 GMT'Would Fire it Onto Ceiling': Prince Philip's Mustard Jokes Landed Him in Trouble With Queen
16:59 GMTREC Group Support for Kamaz Export Projects to Exceed 20 Billion Rubles
16:53 GMTThe Cypriot Caveat: Why Erdogan Shouldn't Call Russia Out on Crimea?
16:43 GMTPoland's PGNiG Says Received Right to Take Part in Certification of Nord Stream 2 Operator
16:39 GMTSotheby’s Puts Frida Kahlo’s Rare 1940 Self-Portrait Up for Auction
16:37 GMTFlash on Jupiter Possibly Caused by 'Alien Bomb,' Blogger Says
16:30 GMTIt's Massage Time: Bulldog Scratches Buddy's Back
16:29 GMTLNA Commander Haftar Instructs Col. Gen. al-Nazuri to Act LNA Head for Next 3 Months
16:20 GMTFrance to Return Ambassador to Washington Next Week After Macron-Biden Phone Call on AUKUS Spat
16:17 GMTWatch Haitian Deportees Throw Shoes at US Officials, Try to Storm Plane in Port-au-Prince
16:07 GMTPorn Actors' Trade Organisation Shakes Hands With Lobbying Firm to Get Protection From Congress
15:58 GMTEinstein’s 'Most Valuable Manuscript Ever' on Theory of Relativity May Fetch up to $4 Mlm at Auction