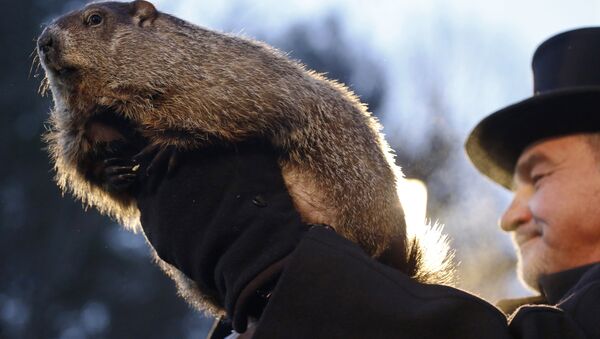 While many eyes on February 2nd might be on Punxsutawney Phil on the 130th Groundhog Day ceremony held by Pennsylvania’s top-hat-clad Groundhog Club, furry meteorologists are celebrated in the rest of the world, too.

Over two decades ago, Bill Murray gave a whole new meaning to the words ‘Groundhog Day’, and it looks like Britain’s Sky Comedy decided to take the repetitious celebration to a whole new level, screening the legendary film 13 consecutive times. Who’s up for the challenge?

​Sadly, in Winnipeg, Canada Groundhog Day was cancelled as the local prognosticator Willow passed away just days before, on January 29. Locals and the Prairie Wildlife Rehabilitation Centre staff remember her fondly as an adorable animal and a great carrot-lover, but some are somewhat worried about such an omen for the weather.

“We are in complete shock and sadness with tears coming down our face to announce the passing of Winnipeg Willow this evening. She was acting her normal self this morning and eating a carrot but came in this evening to find her gone,” Centre staff wrote on Facebook

In another chilly part of the world, Moscow, Russia, local groundhogs ignored their personal holiday alltogether… again. These Moscovites are actually not in the habit of getting up for anything as early as February 2. Frankly, this sleeping in is not doing wonders for the weather in the region, maybe things could improve if the Moscow Zoo woodchucks showed some consideration for the locals and got up to predict an early spring once in a while.

In neighboring Ukraine, Kharkov’s local furry weatherman Timka, who has been awarded a masters degree as an infallible meteorologist, expanded his area of expertise to economics this year. He was asked to make a prognosis regarding the hryvna-dollar exchange rate, but couldn’t decide between 25 and 30 hryvnas per dollar, and the predicted rate was interpreted as ‘unstable’.

Meanwhile back in the US notorious groundhog dropper NYC Mayor Bill de Blasio has decided to remove himself from the Groundhog Day ceremony altogether. First precautions were taken after the tragic incident of 2014, when de Blasio dropped Charlotte, who was stepping in for her brother Chuck. The fall may have resulted in her death in a week, although the Staten Island Zoo states this was a coincidence. In 2015 the NYC mayor kept a significant distance from the animals, and this year decided to insure everyone’s safety by passing on participation.