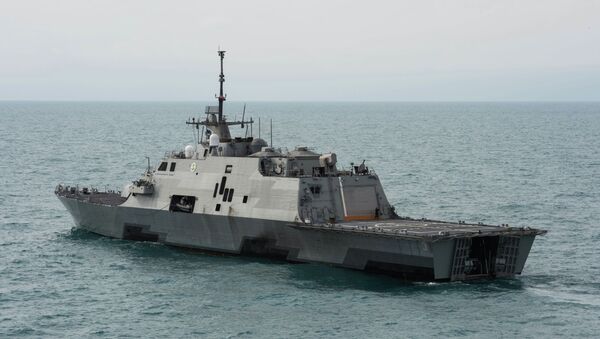 © AFP 2021 / ANTONIO P. TURRETTO
Subscribe
A lynchpin of US Navy strategy, the Littoral Combat Ship is intended to provide fierce firepower close to shore. But new tests find that the state-of-the-art vessels may be vulnerable to smaller, faster attack boats. A representative of the Navy responded to the findings by labelling the test "unfair."

The Littoral Combat Ship (LCS) has seen its share of controversy. Designed for close-shore combat, the program’s development has suffered from cost overruns, as well as embarrassing setbacks. A government watchdog group found that the LCS USS Freedom showed cracks in the ship’s hull. The LCS USS Independence is allegedly susceptible to corrosion.

In spite of these findings, the Pentagon has pressed ahead, seeking the development of 40 LCS ships.

Now, a new problem has surfaced. A recent report by the Director of Operational Test & Evaluation found that the high-tech vessels were unable to defend themselves against smaller, Iranian-style attack boats.

The tests involved a simulated exercise pitting the LCS USS Coronado with a number of attack boats who, in the course of the drill, penetrated the ship’s "keep-out" zone, according to the report. While the Coronado was ultimately able to destroy the attackers, the simulation showed that it would have received heavy damage.

Much of the problems stem from repeated failures in network communications. These errors are said to lead to multiple inaccuracies with the ship’s onboard weapons systems.

The report also cited cybersecurity failures, and even trouble with the Coronado’s generators and air-conditioning units.

Speaking to Breaking Defense on condition of anonymity, a Navy official responded to the report’s findings by calling the test "unfair," and pointing to the fact that the Navy still won the simulation.

"The LCS defeated the adversary, right?" he said. "How nitpicking is that to criticize, 'oh, some of them got too close.' Oh, c'mon. I would call baloney on that."

The anonymous official also suggested that the ship had not yet received its full weapons systems outfit.

"Here’s the other thing: in the scenario, it didn’t have the missile package," he said. "We did testing with the Longbow Hellfire…[and] in the same scenario, high speed maneuverable targets…it defeated seven of eight."

The official did not explain how the eighth target managed to escape destruction.

"It just seems to me it was an unfair treatment," he added, in reference to the findings of the report.

Why the Navy would test the LCS without its complete weapons package is another question, and one that could potentially point to even more cost overruns. The program is also struggling to complete LCS mine-clearing and anti-submarine packages.

The unnamed official’s explanation fails to address onboard hardware and software network issues. The weapons that had been installed prior to the drills suffered repeated malfunctions, and it’s plausible that additional weapons packages would have fallen victim to similar problems.