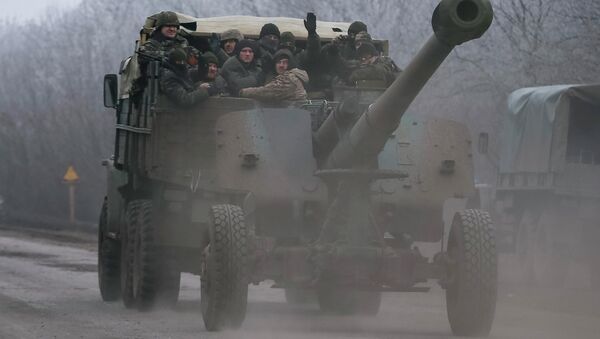 Ukraine’s Defense Ministry is considering sending troops to fight Daesh militants in Syria at the request from President Petro Poroshenko, a UK newspaper cited its source in the Ukrainian government as saying Sunday.

ISIL Militant Admits to Buying Arms in Ukraine, Sending to Syria Via Turkey
MOSCOW (Sputnik) — Ukraine’s potential military support of the US-led international coalition operating in the Middle East will be discussed during US Defense Secretary Ash Carter’s visit to Ukraine this week, the Independent said.

"We have prepared a range of options for our support against Isis [Daesh] including in Syria, which could include troops. It could result in potential clashes with Russians," the outlet quoted the source as saying.

The Russian Aerospace Forces have been carrying out airstrikes against Daesh targets in Syria at the request of the Syrian government since last September.

Ukraine has mobilized tens of thousands of troops since April 2014 to fight militias in two breakaway southeastern regions. It has repeatedly requested assistance from the United States – in terms of equipment, weapons, training and funds.