Chaos in Cizre: ‘Turkish Authorities Trying to Destroy the Truth’ 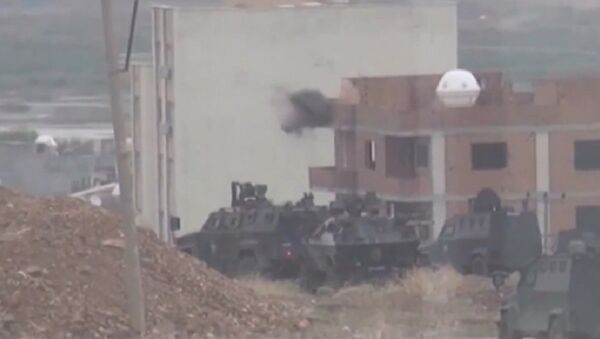 © Photo : Youtube/dIANa hAMDEn
Subscribe
International
India
Africa
More than 19 injured people have been trapped in a basement for over a week in the town of Cizre in Turkey’s Sirnak Province, where the Turkish military is fighting Kurdish militants.

The situation is becoming critical as 6 people have died. Their bodies remain in the building next to the wounded. Some believe that there are civilians in the building while others say there are PKK militants.

Turkey's ‘Fear of Kurds’ Spoils Geneva Talks on Syrian Reconciliation
A group of deputies from the pro-Kurdish party continue their hunger strike, which they announced in protest against the actions of the central government of Turkey. One of the protesters, pro-Kurdish Peoples' Democratic party (HDP) Deputy Osman Baydemir, spoke to Sputnik in an exclusive interview sharing information about what is actually going on.

Ankara stated that ambulances were sent to Cizre but because of the constant clashes in the region, doctors have not been given permission to enter the city. According to reports the building is under heavy artillery fire. The wounded are in urgent need of medical care and water. Meanwhile, the ambulance crews are stopped by armored vehicles at the entrance to the city.

“We live in a terrible time, when all the values accumulated by mankind in its history, are being destroyed right before our eyes. Even in war there is a code of conduct, unwritten code, formed over many centuries. But now it is not valid, none of those rules. Between statements of Ankara and the actual situation in Cizre there is a gulf.

We are talking about either a very well-planned conspiracy, or the security forces that conduct counter-terrorist operation in Cizre, do not recognize or obey the authorities,” Bayderim said.

​The deputy further said that the government officials claim that the PKK members shoot at ambulances, but that is complete lies. “Yesterday, while we were at the Ministry office, we spoke on the speakerphone with the driver of one of the ambulances. They tried to get to the scene 11 times and each time the road was blocked. When it was just 100 meters to the building, the security forces said, ‘What order of the Prime Minister? We know nothing,’ and they opened fire at the cars. The authorities were listening on the speaker and shrugging their shoulders, saying ‘You see we cannot do anything.’”

Bayderim criticized the Turkish president saying that, “War destroys not only people, but also the truth. What the government is now striving to achieve today together with the media — is an open attack on truth. Authorities are trying to destroy the truth.”

Raising the Stakes: 'Unpredictable' Erdogan May Start Intervention in Syria
According to the deputy the president is satisfied with the information that he receives, and does not intend to actually understand the situation. He has completely shifted the responsibility for what is happening on the security forces of the region.

Osman Baydemir stressed that throughout all the republican history of the state, violence has always led to the emergence of new forms of protest in society.

“The reason for the existence of the PKK today is practice of terror by the authorities during coups of the past. I want to appeal to Mr. President that the September 12 coup and violence on part of the authorities gave rise to terrorism of the PKK. Similarly, the atrocities that were done by the security forces during the 5 months period in Cizre, Silopi, Sirnak became the cause of hatred, anger, mistrust of the population and further strengthened the position of radical organizations.”

The deputy said that it is extremely important to put an end to the chaos and obfuscation that is going on in the south-east of the country.

The Kurds have long been campaigning for the right to self-determination and greater autonomy in Turkey, where they are the largest ethnic minority.

Ankara has been stepping up its military operations in the mainly Kurdish areas located near Turkey’s borders with Syria and Iraq since December. Erdogan has declared to continue the military campaign until the area is cleansed of PKK militants.