Syrian Peace Talks 'Are Orchestrated to Fail': Who's to Blame? 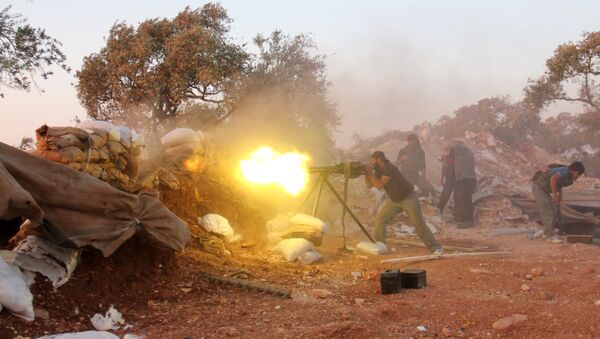 Peace Talks: Saudi Arabia ‘Turning UN Negotiations on Syria Into Farce'
The US political leadership has recently appeared to have abandoned its strategy on Syria that revolved around the concept that Bashar al-Assad must resign before any meaningful peace process is launched. Washington voted in favor of UN Security Council resolution 2254, which offers a roadmap to peace in the war-torn country through inclusive talks, nationwide ceasefire and elections. The document does not address the issue of Assad's future.

Yet Lendman believes that the White House did not have a change of heart. Obama, according to the analyst, is still pursuing a regime change in Syria.

The US president wants "Assad and loyalists around him ousted, an Israeli rival eliminated, [and] Iran isolated." The activist also maintains that the White House wants to "balkanize" Syria and install a puppet government in the country.

"How can there be peace in Syria when achieving it defeats Washington's agenda?" he asks. "It appears Washington, [its] key NATO partners, Israel and Saudi-led Gulf States orchestrated a farcical scenario, fantasy talks doomed to fail, Assad wrongfully blamed." 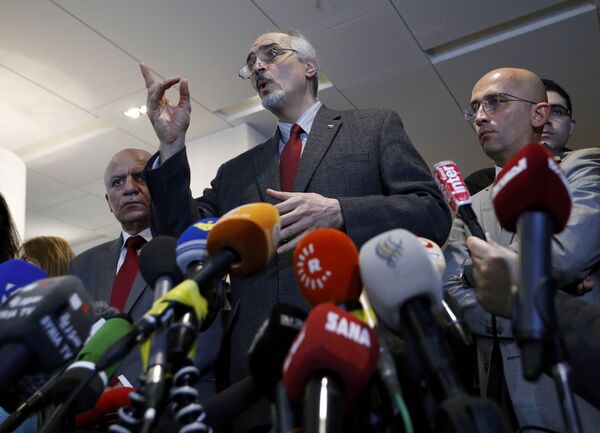 The highly-anticipated peace talks started last week, with Damascus representatives arriving in Geneva on Friday. The Saudi-backed High Negotiations Committee (HNC), an umbrella opposition group, came to the Swiss city the next day.

"At best, whoever shows up (if anyone) representing the HNC won't negotiate, only talk to UN officials – insisting Russian and Syrian anti-terrorism targeting ceases, including against towns held hostage by [Daesh] and other terrorist groups, demands made to subvert, not facilitate discussions," Lendman noted.

The columnist emphasized that the Syrian Kurds are not taking part in the talks, but, as Moscow has repeatedly insisted, without them no credible solution could be found. The Syrian crisis is complicated by the sheer number of parties and stakeholders involved. Russia maintains that all of them, except terrorist groups, have to participate in the talks for them to succeed.

000000
Popular comments
Are UN in coalition with US-Nato Israel the Saudis and Turkey deliberately making these Peace talks fail so they have a reason to attack and invade Syria. It doesnt look better US criminals and all the above mentioned nations has funded and supported Daesh and should be ousted from these negotiations . EU, Russia and Iran should perhaps be the only parts in these negotiations together with know non terrorist Syrian opposition UN,s Talks about ceasefire Before Daesh is compleatly defeted and their acceptence of terrorist organisations into the Peace talks just shows how corrupt UN is.
Linda
1 February 2016, 17:16 GMT2
000000
Obama on behalf of the british is the crucial factor! The british Oxford Center for Islamic Studies (OCIS) with leading Wahabi scholars, prince Bandar and last but not least prince Charles on board is a very direct connection. The City of London connected Zeusian oligarchy have dictated that Assad must go! How can they be gods of the Olympus if the world doesn't bend to their will?
hans.schultz
1 February 2016, 17:16 GMT2
000000
Newsfeed
0
New firstOld first
loader
LIVE
Заголовок открываемого материала
Access to the chat has been blocked for violating the rules . You will be able to participate again through:∞. If you do not agree with the blocking, please use the feedback form
The discussion is closed. You can participate in the discussion within 24 hours after the publication of the article.
To participate in the discussion
log in or register
loader
Chats
Заголовок открываемого материала
Worldwide
InternationalEnglishEnglishMundoEspañolSpanish
Europe
DeutschlandDeutschGermanFranceFrançaisFrenchΕλλάδαΕλληνικάGreekItaliaItalianoItalianČeská republikaČeštinaCzechPolskaPolskiPolishСрбиjаСрпскиSerbianLatvijaLatviešuLatvianLietuvaLietuviųLithuanianMoldovaMoldoveneascăMoldavianБеларусьБеларускiBelarusian
Transcaucasia
ԱրմենիաՀայերենArmenianАҧсныАҧсышәалаAbkhazХуссар ИрыстонИронауОssetianსაქართველოქართულიGeorgianAzərbaycanАzərbaycancaAzerbaijani
Middle East
Sputnik عربيArabicArabicTürkiyeTürkçeTurkishSputnik ایرانPersianPersianSputnik افغانستانDariDari
Central Asia
ҚазақстанҚазақ тіліKazakhКыргызстанКыргызчаKyrgyzOʻzbekistonЎзбекчаUzbekТоҷикистонТоҷикӣTajik
East & Southeast Asia
Việt NamTiếng ViệtVietnamese日本日本語Japanese中国中文Chinese
South America
BrasilPortuguêsPortuguese
NewsfeedBreaking
06:03 GMTSecond Day of Appeal Hearing on Julian Assange's Extradition
06:02 GMTDanish PM Faces Impeachment for Deleting Her Messages Related to Slaughter of 15 Mln Mink
05:37 GMTBritons Hit the Streets to Protests Against 'Spiking Epidemic' in UK Nightclubs - Photos
04:15 GMTParis Sends Warning to Two British Boats Fishing in French Waters as Post-Brexit Tensions Soar
03:55 GMTNASA Solves Problem of Urine Leaks in Toilet Aboard Inspiration4 Spacecraft
03:42 GMTNot a Unicorn! Take a Look at NASA's Newly Released Photo of Nebula That Resembles Godzilla
03:18 GMTCOVID-19 Cases Continue to Decline in Florida as Immunity Increases
03:04 GMTAin't Afraid of No Ghosts: Americans Willing to Live in 'Haunted' Houses For Discount, Survey Shows
02:29 GMTTexas AG Paxton Files Amicus Brief for Facebook's 'Vague and Inaccurate' Interpretation of Law
02:19 GMTDemocratic Governor Whitmer Faces Backlash For Once Again Violating COVID-19 Policies
01:53 GMTHackers Breach, Leak Personal Data of Israeli Defense Ministry Servicemembers, Emails of Benny Gantz
01:07 GMTChina Seeks Upgrade of ASEAN Relationship to Comprehensive Strategic Partnership at November Summit
00:50 GMT‘Don’t Mess With Your Grandmother’: Prince William Recalls Dispute With The Queen Over Wedding Look
00:19 GMTShiba Strong! Netizens Demand Robinhood to Declare Soaring Shiba Inu Coin Cryptocurrency
00:14 GMTBiden Admin. Bars Immigration Arrests at Schools, Hospitals, Places of Worship
YesterdayASEAN Urged to Recognize Myanmar’s Ousted National Unity Government After Snubbing Junta Chief
YesterdayHackers Breach US National Rifle Association, Threaten to Release Stolen Files - Reports
YesterdayFC Barcelona Fires Ronald Koeman as Club Coach
YesterdayBiden Admin. Dodges Standard Regulatory Rulemaking to Rush Vaccine Mandate
YesterdayGerman Intelligence Detected No Foreign Interference in Parliamentary Elections