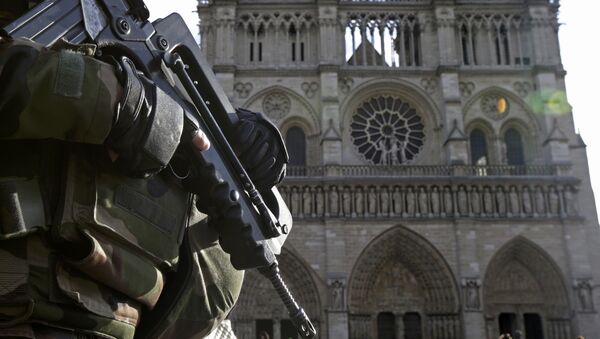 Dozens of demonstrations were held across France on Saturday to protest a proposed extension of the state of emergency, local media reported.

Over 30% of French Citizens Fear Int'l Terrorism After Paris Attacks
MOSCOW (Sputnik) — Between 5,000 and 20,000 gathered for a rally in Paris despite drizzling rain, official sources cited by the French newspaper Le Figaro said.

Representatives of numerous trade unions and rights advocacy groups reportedly chanted "End the state of emergency!" and "We will not give up!" as they rallied at the Place de la Republique.

Hundreds more showed up at demonstrations in Nantes, Toulouse, Bordeaux, Pau and Bayonne to protest an open-ended state of emergency, as well as the government’s plan to strip suspected terrorists of citizenship if they have a dual nationality.

Emergency was declared in France following a series of terror attacks by militants linked to Daesh militant group in Paris on November 13, which killed 130. It expires on February 26.

French President Francois Hollande seeks parliamentary approval of the plan to prolong the state of emergency, which will be put to vote next month.