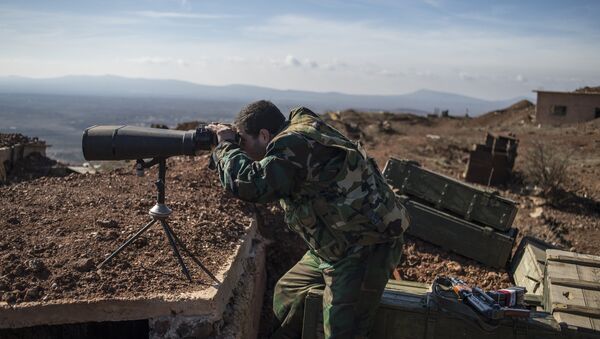 The Syrian Army and popular forces beat back a series of attacks by the Al-Nusra Front terrorist group in the country’s southern Quneitra province near the Golan Heights on Saturday leaving scores of militants killed and wounded, Iran’s Fars news agency reported.

Wiped Out: Syrian Army Claws Back Strategic Heights in Latakia
A unit of Al-Nusra Front terrorists were attempting to capture the strategic region of Jaba as well as Bozaq and Korom Heights, but were pushed back by government forces who had prior knowledge about the enemy’s plans, the agency wrote.

After eight hours of fierce firefights the Syrian Army forced the attackers to retreat, leaving many terrorists killed and wounded.

Earlier this month, the Syrian Army announced that its troops had engaged in heavy clashes with the terrorist groups in the eastern countryside city of Quneitra.

"The eastern side of Mashara village near the southwestern city of Quneitra was the scene of a special operation by the Syrian Army against the militant groups who preferred to pull back after leaving behind scores of dead and wounded members," the army said in a statement.

Syrian fighter jets also have been targeting the militant groups' positions in the Aleppo province in recent days.