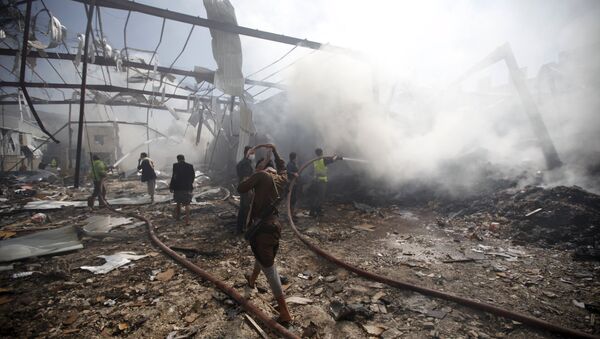 Arms supplies to countries that have records of human rights abuses run counter to the United Kingdom’s campaign for a better democracy, a spokesperson for the Muslim Association of Britain told Sputnik.

MOSCOW (Sputnik), Yulia Shamporova – Last week, the UK government released arms sales statistics showing that British arms companies had boosted their sales to Saudi Arabia, which has one of the worst human rights records in the world, by more than 100 times over the course of last year.

"We are quite surprised that the British PM [David Cameron] continues to supply British arms to countries who have track records of human rights abuse, despite his eagerness to promote the fundamental British value of democracy," the spokesperson said.

Silent Mode On: UK Cameron at Fault for Not Condemning Saudi Executions
The comments come following media and rights watchdogs’ reports that the Saudi-led international coalition, fighting the Yemeni Houthi rebels, had been using UK weapons to target civilians.

On Wednesday, Cameron dismissed a proposal by Jeremy Corbyn, the leader of the opposition Labour party, to launch an inquiry into the delivery of UK-manufactured arms to Saudi Arabia.

Yemen has been engulfed in a military conflict between the government and Houthi rebels, the country’s main opposition faction, for more than a year. Since March, a Saudi-led coalition has been conducting airstrikes against Houthi positions at the request of Yemeni President Abd Rabbuh Mansour Hadi.