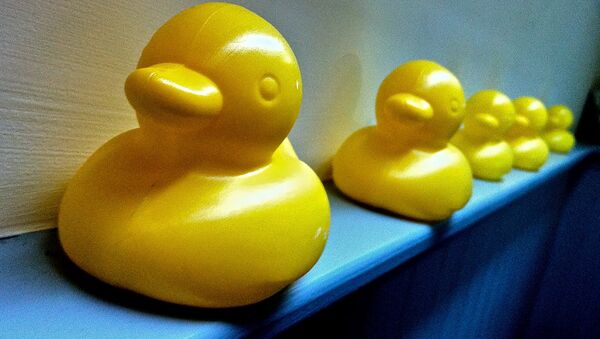 © Flickr / Fiona MacGinty-O’Neill
Subscribe
Are we becoming a plastic planet? Researchers say we’re producing more plastic than ever before

Environmental researchers estimate that plastic is being produced at such a rapid rate and in such abundance that there is almost no place left on earth where plastic has not been deposited by wind or water. Some are suggesting we are becoming a plastic planet.

Earth will be buried by increasing layers of plastic. Welcome to Planet Plastic https://t.co/SBXGULZX8U pic.twitter.com/chLHuv1xDL

​Plastic is extremely convenient. It’s durable, flexible and lightweight. It’s also excellent for storing stuff. Have you ever thought about putting the world in a plastic bin?

A new study suggests that enough plastic has been produced since the 1950s to wrap the world in a single layer of plastic. By 2050, production levels are expected to exceed 40 billion tons or enough to wrap the earth six times over.

It’s also bound to become a part of our planet’s geological make up.

Above ancient layers of fossilized remains in the earth’s crust could someday lay a stack of fossilized Coca-Cola bottles and cheap toys – an exhibit of our creation left behind long after we’re gone.

How so? The same researchers point that since the ‘50s, plastic has become one of the most heavily deposited substances on the planet. To some extent, plastic decomposes leaving behind what scientists call “techno-fossils.”

“So if one simply takes plastic and buries it, away from sunlight and erosion, it will leave a mark in the rocks of the future,” said the report’s main author Jan Zalasiewic in an interview with TakePart.com. “I have no doubt that we will leave a layer that looked at by anybody from the far future, show fossilized plastic bottles and all the other things we make from plastic.”