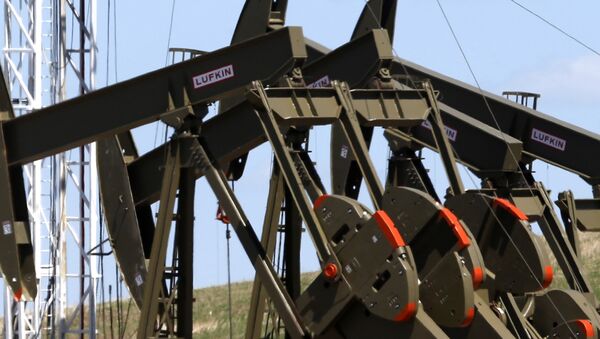 A cut in oil production by Organization of the Petroleum Exporting Countries (OPEC) member states, as well as other oil exporters, is unlikely to make a difference in terms of the low oil prices, experts told Sputnik.

MOSCOW (Sputnik) — If such a cut were to take place, the effect on oil prices would be negligible, according to experts. "A five-percent reduction will make little difference. Should major oil producers agree to cut production, as soon as prices go up, rig activity will ramp up from all those producers who have been sidelined by low prices," Trends Research Institute head Gerald Celente said.

Thursday's mid-afternoon $35-per-barrel price spike in oil prices coincided with remarks by Russian Energy Minister Alexander Novak on Russia's readiness to cut production alongside OPEC member states by 5 percent, as proposed by Saudi Arabia. While OPEC denied that Saudi Arabia made such an offer, a meeting remains on the table and prices have remained around the $34-per-barrel mark throughout Friday.

Driven by the news, oil prices have been rebounding after hitting a historic low on January 20, when Brent crude plunged below $28 per barrel, the lowest level since 2003. Within a week, Brent surpassed the $33-per-barrel mark, reaching the $34 per barrel on Thursday after a peak of over $35 per barrel.

Such volatility based on rumour is in markets' very nature, Celente said, stressing that the recent increase was purely speculative.

The main reason for the long-term decline in oil prices is the global downturn in commodity prices, which have formed a glut in the global marketplace, driven by excess capacity and under-consumption, according to Celente.

Russia, Saudi Arabia Ready to Curb Oil Production to Stabilize Oil Market
Commodity prices have been declining since mid-2014, falling some 30 percent throughout 2015. Losses extended into December, with plummeting oil prices driving a 7-percent commodity price fall, according to International Monetary Fund figures. The Bloomberg Commodity Index fell from almost 140 points in mid-2014 to less than 77 points by late January this year.

Another reason for a cut in oil output being rendered ineffective is the recent lift of international anti-Iran sanctions Celente said. It is difficult to see Iran agreeing to a cut in production after years of sanctions have caused massive losses for the country in lost oil export revenues, he emphasized.

Other experts have cast doubt on all other oil producing countries' ability to cut production. "Discipline among OPEC members has never been high…and one of the largest crude producers in the world, the US, cannot and will not partake in production regulation altogether. In sum, one could question how successful OPEC regulation has been in the past, and in the current market environment that may be even more challenging," Tim Boersma, the acting director of the Brookings Institution's Energy Security and Climate Initiative, told Sputnik.

In a late 2015 meeting, OPEC failed to agree on cutting production in favour of maintaining market share. The cartel regularly exceeds its own daily production quota, while Saudi Arabia, OPEC’s largest producer, has maintained production levels over the past year above 9.6 million barrels per day.

Boersma also cast doubt on Russia's willingness to reduce oil output. With its economy currently contracting, Russia has incentives to maintain production in order to maximize revenues in a low price environment, he said. Thus, the global mismatch of supply and demand is likely to persist with Iran's return to the world market and with China's growth at its slowest rate for over 20 years, Boersma added.

This week's rally in oil prices began after initial news of a possible OPEC extraordinary meeting to address the plummeting prices, which previously halved within the space of less than six months. Throughout the week, the potential OPEC meeting, possibly involving non-member countries, has been mentioned by several senior cartel member states and non-member states' officials, including OPEC's secretary general, Nigeria's petroleum minister, Venezuela's president, Bahrain's energy minister as well as the Russian energy minister.