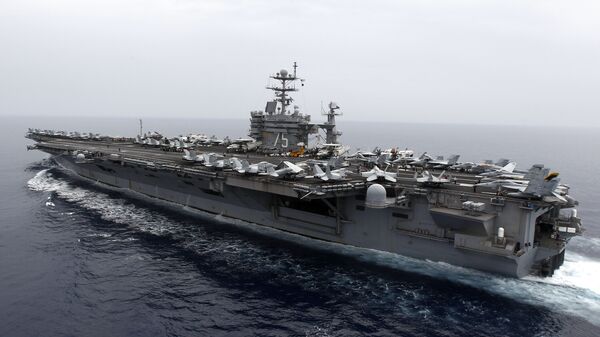 © AP Photo / Fabrizio Bensch/Pool
Subscribe
International
India
Africa
An Iranian drone flew over the US aircraft carrier in the Gulf and made a video of its flight, the Iranian media reported on Friday.

“[I]n this observation which took place on the third day of Velayat-94 drills, the Iranian navy drone managed to take precise photographs of the systems installed on the US aircraft carrier and sent them immediately to the exercise’ command post,” the agency cited Iranian Navy Deputy Commander Rear Adm. Seyed Mahmoud Mousavi as saying.

The news agency added that the drills began on Wednesday and will last until February 1 in an area limited to eastern part of Hormuz Strait, Sea of Oman, northern Indian Ocean and 10th Parallel north.

The goal of Velayat-94 is to “demonstrate the capability and authority of Iran in maintaining security in the seas,” according to the agency.

US, Iranian Warships Nearly Collide in Gulf of Aden – Iranian Media
The reports come following the incident that occurred on January 12, when Iran had seized two US boats en route to Bahrain in the Persian Gulf with 10 sailors aboard.

A source in the Iranian Revolutionary Guard Corps told Sputnik the following day that the US vessels had entered Iranian territorial waters due to technical issues.

The boat’s crew, nine men and a woman, was taken to international waters and freed on January 13.