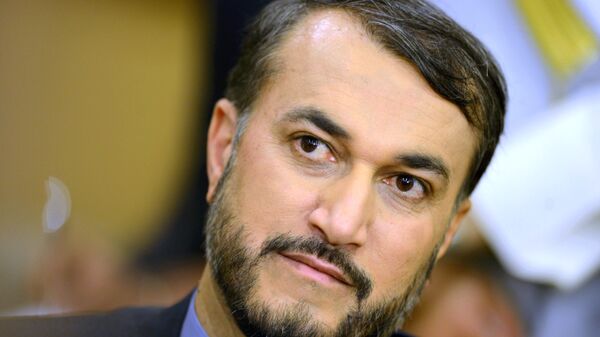 "We will continue our support in several aspects. Iran and Russia will support Syria against threats the country is facing," Abdollahian said at a press conference in Moscow.

Countries bordering Syria should control their frontiers vigilantly, he noted, explaining that were potential jihadists to be prevented from entering the country by land, greater security within Syria could have been achieved.

On January 22, Iran's Presidential Chief of Staff Mohammad Nahavandian told Sputnik that finding a solution to the Syrian crisis was directly linked to the fight against terrorism.

"[The meeting will take place] probably on February 11, though we have not received an invitation yet," Abdollahian said at a press conference in Moscow.

According to Abdollahian, Iran is "optimistic about the upcoming intra-Syrian reconciliation talks" as it can become a step forward to the peaceful solution of the conflict.

According to Abdollahian no agreements have been reached regarding the lists of terrorist groups.

"There are many problems regarding the agreement of terrorist groups lists, there is no consent among the countries," Abdollahian stressed.

According to the Iranian diplomat, Tehran insists that Daesh, Nusra Front, Jaysh al-Islam, Ahrar ash-Sham are included as terrorist groups, while some countries consider only Daesh and Nusra Front to be terrorist organizations.