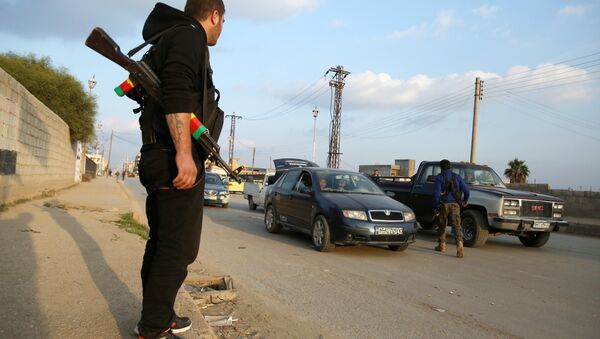 Syrian Kurds Not to Recognize Outcome of Geneva Talks
WASHINGTON (Sputnik) — The Syrian Kurdish Democratic Union Party (PYD) has not been invited by the United Nations to the talks between the Syrian government and the opposition that are scheduled to begin in Geneva, Switzerland on Friday. The Kurdish party accused Ankara of throwing its weight behind the UN decision.

"Unless you are for a permanent war, you would want to accommodate the Kurds and invite them to the [Syrian] peace talks," Xulam said on Wednesday. "As to the party that doesn’t want them in Geneva, namely Turkey, they cannot maintain a state of war with the Kurds the way they did with the Armenians 100 years ago."

Xulam added that the Kurds want peace, but peace requires the participation of the group’s respective interlocutor in negotiations.

"As things stand, [Turkish President Recep Tayyip] Erdogan and his cronies insist on the course of war directly as well as through the proxies," Xulam explained. "Like all wars, their war too will come to an end."

Xulam added that the Kurds are way too many, 30 to 40 million, and better connected if Ankara tries to apply the Armenian solution to the Kurdish question.

The love Kurds feel for their emancipation struggle is stronger than the hate some Turks feel toward it, Xulam claimed.

The Islamic State, also known as Daesh, is a designated terrorist group outlawed in the United States and Russia as well as in numerous other countries.

On Wednesday, a PYD representative said the Syrian Kurds will not recognize the outcome of the upcoming intra-Syrian negotiations in Geneva as the talks will be held without their participation.