Recipe for Disaster: Pentagon's Involvement to Fan the Fire in Syria, Iraq 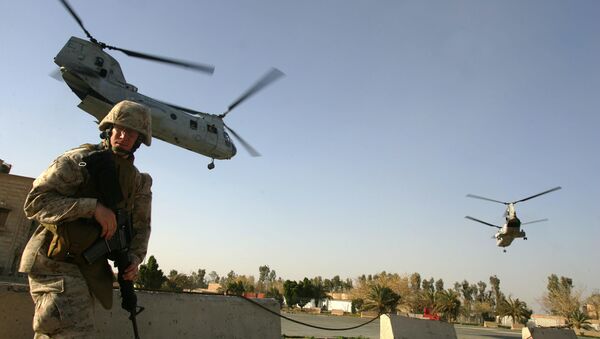 In the past 14 years, Washington's road to the Middle East, Central Asia and North Africa has been littered with banana peels; although the Pentagon's strategy has yielded nothing but disaster in the regions, it seems the White House is unwilling to change its foreign policy, Peter Van Buren notes.

The prospect of America continuing its military involvement in the Middle East and putting more "boots on the ground" is a recipe for disaster, not a solution to a problem like Daesh (Islamic State/ISIL) according to Peter Van Buren, a US author and 24-year veteran of the US State Department.

"Time to remind him or her [US presidential candidates] that Washington's war on terror strategy has already sent at least $1.6 trillion down the drain, and left thousands of American troops and hundreds of thousands, if not millions, of Muslims dead. Along the way we lost precious freedoms to the ever-expanding national security state," Van Buren writes in a recent article for his WeMeantWell.com site.

To 'Degrade and Destroy': Hidden Flaws in Pentagon's Syria Strategy
Remarkably, while speaking at the World Economic Forum in Davos, Switzerland, US Defense Secretary Ashton Carter underscored that the defeat of Daesh is "something that's very much on [his] mind." "It needs to occur and it will occur… first and foremost in Syria and Iraq." According to Carter, the Pentagon has a "very specific plan" that it will carry out together with its NATO allies and partners on the ground.

The US-led coalition is determined to capture Mosul in Iraq and Raqqa in Syria, the US Defense Secretary stressed. During the event at Davos, Carter pointed out that Washington's allies in the region have not been doing enough to defeat Daesh and added that there will be "boots on the ground" in Iraq and Syria.

According to Van Buren, however, more air attack sorties and fighting are unlikely to halt the Daesh advance. Firstly, he said, Washington should cut off Daesh's sources of funding.

"As long as the US insists on flying air attack sorties (and your candidate may unfortunately need to do so to cover his/her right flank), direct them far more intensely than at present against one of ISIS's [Daesh's] main sources of cash: oil exports. Blow up trucks moving oil. Blow up wellheads in ISIS-dominated areas. Finding targets is not hard," the former US State Department official writes.

Going Rogue: Saudi Arabia's Assertive Foreign Policy Bears Its Fruit
Next, the White House should exert diplomatic and economic pressure on Turkey to prevent Ankara from smuggling oil; similar measures should be undertaken towards those who buy the stolen oil, Van Buren remarks.

"The same should go for Turkey's behavior toward [Daesh]," he continues, referring to Ankara's "determination" to fight Kurdish forces (which are fighting the terrorist organization) and the way the Turkish leadership allows jihadists to enter Syria.

Van Buren also calls attention to Ankara's involvement in funneling arms to various Islamist groups in Syria, adding that it should be brought to an end.

At the same time, Washington should make it clear to Saudi Arabia and other Sunni Gulf leaders that they must stop funding Daesh.

"Forget a 'no-fly zone' over northern Syria — another fruitless 'solution' to the problem of the Islamic State [Daesh] that various presidential candidates are now plugging — and use the international banking system to create a no-flow zone," he stresses.

Rmeilan Airfield: Is Pentagon Preparing for All-Out Offensive in Syria?
After that, instead of adding more fuel to the fire of the regional conflict by sending more troops and special ops in the war zone, Washington should step out:

"Get out. Land the planes, ground the drones, and withdraw. Pull out the boots, the trainers, the American combatants and near combatants (whatever the euphemism of the moment for them may be)… Throwing more money (lives, global prestige…) into the pot won't alter the cards you're holding," Van Buren underscores.

Washington is unable to ultimately mend the situation in Syria and Iraq given the 14-year record of its failures in the Middle East, North Africa and Central Asia.

"It's time for the US to stand back and let local actors deal with the present situation. ISIS's [Daesh's] threat to us is actually minimal… Without Washington further roiling the situation, it's a movement whose limits will quickly enough become apparent," the retired American official states.