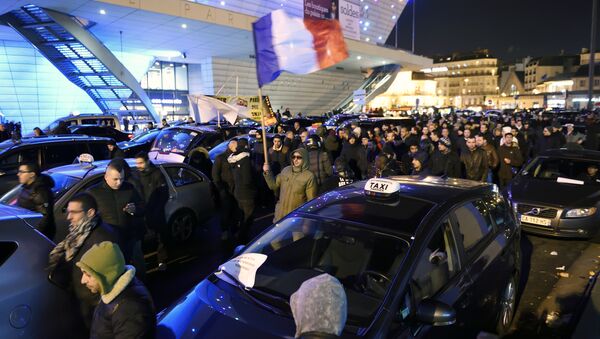 Licensed taxi drivers in the French capital continued their protests against private cabs, as well as companies that provide app-based taxi services, including Uber and VTC, local media reported Wednesday.

Greek Seamen on 48-Hour Strike Over Planned Pension Reforms
PARIS (Sputnik) – About 2,000 taxis either blocked or delayed traffic across Paris on Tuesday. Some of the taxi drivers clashed with police, setting fire to tires and blocking the highway.

Both Uber and VTC operate by putting customers and private drivers directly in contact, thereby often offering lower prices than regular taxis. Licensed drivers are calling for the VTC service to be banned or for a special compensation system to be worked out. They intend to continue protesting until their demands are fully met.