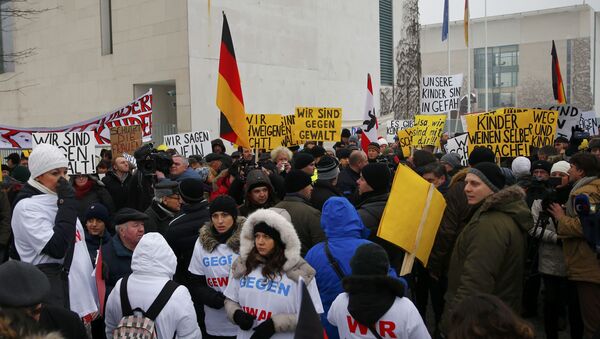 © REUTERS / HANNIBAL HANSCHKE
Subscribe
Moscow hopes that justice will prevail in the investigation into the case of a 13-year-old Russian-speaking girl, who was allegedly raped in Berlin by several men believed to be immigrants, Foreign Minister Sergei Lavrov said Tuesday.

Lavrov Recaps Year of Russian Diplomacy in Annual Press Conference
MOSCOW (Sputnik) —  On January 16, Russia's Channel One aired an interview with a woman claiming to be the girl’s aunt, who said her niece had been abducted on her way to school in Berlin and raped by "Arab migrants." Two days later, Berlin police released a statement, stating there was no evidence that the alleged kidnapping and rape had taken place.

"I think that truth and justice should prevail [in the case]. I hope that [Germany's] migration problems will not lead to an attempt to cover up what is really happening for some internal political reasons, that would be wrong," Lavrov said at a press conference dedicated to a review of the results of Russian diplomacy in 2015.

The Russian foreign minister also expressed hope that Germany would manage to cope with the migration influx without suffering "significant losses."

Europe is struggling to find a solution to a massive refugee crisis, with hundreds of thousands of refugees fleeing conflict-torn countries in the Middle East and North Africa. Germany received the most asylum applications in Europe last year.