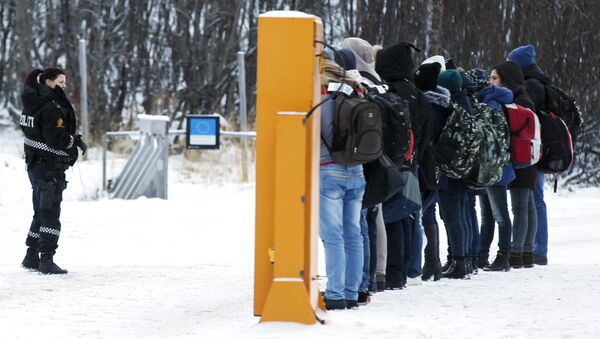 Norwegian Foreign Ministry stated that Oslo is engaged in constructive dialogue with Moscow on the situation related to refugees on their shared border.

Norway, Russia Have Shared Understanding of Refugee Problem - Oslo
MOSCOW (Sputnik) – Oslo is engaged in constructive dialogue with Moscow on the situation related to refugees on their shared border and is familiar with the Russian authorities' position of not accepting the return of refugees who provided false information about the purpose of their visit to Russia, the Norwegian Foreign Ministry told Sputnik on Tuesday.

Earlier on Tuesday, Russian Foreign Minister Sergei Lavrov said Moscow would not take back refugees who crossed into Norway through its Russian border, having provided false information about the reason for the trip to the Russian authorities.

"We have a constructive dialogue with Russian authorities on these matters," the head of communications of the Norwegian Foreign Ministry told Sputnik in an e-mail message.

He added that Lavrov’s statement "is a well-known position of the Russian authorities."

According to the top Russian diplomat, some migrants who are now in Norway awaiting deportation, came to Russia with the stated aim of working or visiting relatives, they did not state that their aim was to transit to Norway.

The northernmost migrant route has been used by an estimated 5,500 refugees. Those asylum seekers choosing to enter Norway through Russia are not eligible for asylum, according to Oslo, as they arrived from a safe country.

Last year Norway deported some 400 asylum seekers, under a 2008 intergovernmental agreement, who had documentation or a multi-entry visa allowing them to be in Russia.

Norway’s immigration affairs office claims around 700 asylum seekers holding such documents are currently in the Nordic country. On Sunday, the director of a Murmansk transportation company told RIA Novosti that the Norwegian authorities were planning to deport some 280 refugees to Russia.