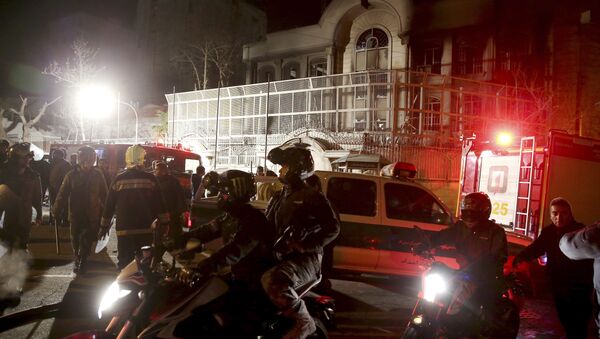 Iran is continuing to investigate the events surrounding the attack on the Saudi embassy in Tehran on January 2 and has discovered evidence of foreign involvement in the incident, the Iranian Parliament Speaker's Adviser for International Affairs Hossein Sheikholeslam told Sputnik.

"We acknowledge that the attack on the Saudi embassy in Tehran was a big mistake, and state that all those responsible will be punished," Sheikholeslam said, and expressed disappointment with the reaction of the Saudi authorities to the incident.

"One gets the impression that it's as if they knew and expected that such an event would happen, so that they could react like that – cut diplomatic ties. As a result the situation has only been exacerbated, which is not useful for resolving a series of crises in the region."

On January 2 Saudi Arabia executed 47 prisoners, including prominent Shiite cleric Nimr al-Nimr. The execution of al-Nimr, a vocal critic of the Saudi government, led to protests across the world, and particularly in regions of the Middle East with Shia populations. As well as protests in Iran, there was unrest in Saudi's Shia-majority Eastern Province, Bahrain and Yemen.

In Tehran some protestors against the execution attacked the Saudi embassy in retaliation. Saudi Arabia, followed by its allies Bahrain and Sudan cut diplomatic ties, and the UAE downgraded ties, in what they said was a protest at the attack. 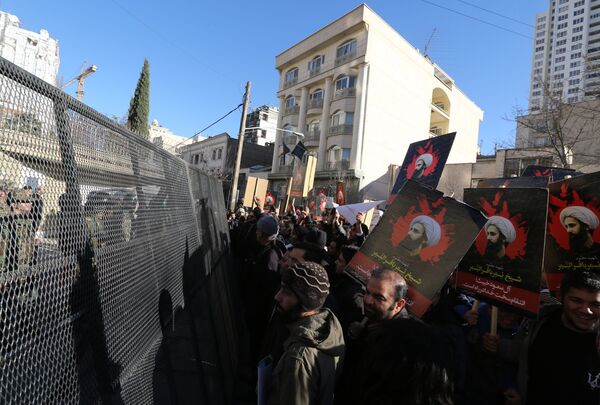 Iranian riot police block a street leading to the Saudi embassy as protesters hold portraits of prominent Shiite Muslim cleric Nimr al-Nimr during a demonstration against his execution by Saudi authorities, on January 3, 2016, in Tehran
© AFP 2022 / ATTA KENARE
Sheikholeslam referred to the statement on Sunday by Iran's Judiciary spokesman Gholam Hossein Mohseni-Ejei, who said that around 100 people had been arrested as part of the investigation, some of whom have since been released.

"The Iranian embassy has also been attacked in different countries. However, nobody, nowhere, has investigated the incident as seriously and thoroughly as we are doing now," the Judiciary spokesman said.

Mohseni-Ejei revealed that the enquiry had turned up "implications and evidence that the enemy has used some simple-minded elements in [bringing about] the violation against the Saudi embassy."

"The official results of the investigation will be announced later. But according to the information which I have now, there is proof that foreign nationals were in fact involved."

Sheikholeslam also drew comparisons with the siege of the Iranian embassy in London in 1980 by Iranian Arab separatists from the province of Khuzistan, which ended after several days when British special forces stormed the embassy.

"There were some civilians casualties as a result of the storm, but nevertheless we didn’t sever diplomatic relations with the British authorities, we did not demonstrate any aggression, we kept our heads and asked the authorities of that country to punish those responsible."

"However, the behavior of Saudi Arabia has not been anywhere near as tolerant as it should have been," said the government advisor. He also compared Riyadh's response with its behavior after the stampede on September 24 at Mina during the Hajj pilgrimage.

Nearly 100 Saudi Embassy Attack Participants Arrested in Iran - Reports
At least 2,411 pilgrims died in the stampede, three times as many as Saudi Arabia officially claims. Despite announcing an investigation into the incident, the Saudi authorities have not updated the death toll of 769 they issued two days after the tragedy, and the Saudi press has not mentioned the investigation since October.

"I would also like to make a comparison with the actions of the Saudi authorities after the incident in Mina valley, as a result of which 8,000 pilgrims died, among whom were Iranians," said Sheikholeslam.