Is Brussels Preparing for Maidan 2.0 in Warsaw? 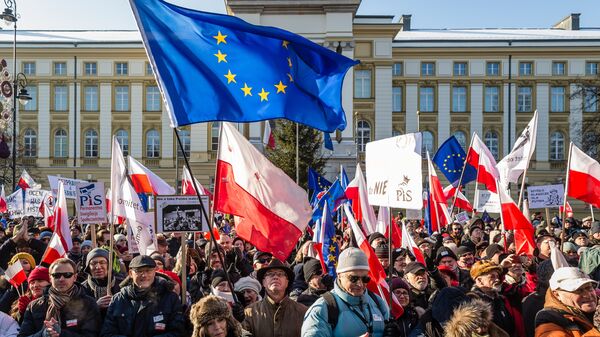 With the political conflict between Brussels and Warsaw continuing to heat up and Poland facing accusations of 'sinking into totalitarianism', while anti-government protests by pro-EU forces rock the country, independent Polish journalist Konrad Stachnio warns that the EU may be preparing the country for a Maidan-style 'revolution'.

In his article, published in the online foreign affairs journal New Eastern Outlook, the independent journalist suggested that today, "anyone observing current events taking place in Poland could have the impression that we are dealing with an almost unprecedented violation of human rights and the introduction of a totalitarian regime by the newly chosen government."

The Law and Justice Party (PiS), which gained control of both the presidency and the parliament in elections held in the spring and fall of last year, has stepped into a war of words with Brussels and Berlin, along with much of its own population over newly introduced laws on the media, the country's constitutional court, and plans for a new surveillance law.

​Now, Stachnio fears, an aggressive campaign by the Western officials and media to demonize the PiS government, together with calls by parts of the opposition to initiate 'Maidan-style' protests in Warsaw, could combine to threaten the country's democracy.

Why Poland 'Should Not Try Merkel’s Patience'
"The sense of Poland sinking into totalitarianism can be seen in the propaganda deliberately introduced into public circulation by media [networks] such as CNN," the journalist writes.

"In addition, part of the so-called opposition, removed from power in recent democratic elections, is calling for the initiation of Maidan-style protests in Warsaw and trying to challenge the democratically elected government."

"The whole thing," Stachnio notes, "could of course be [taken] with an ironic smile – on the face of it, it is looking like the ousted political, business and media establishment are getting out of their luxury cars and going into the streets to call for a repeat of Maidan. Doing this, of course, under the alleged banner of 'restoring democracy', can be read as an attempt to bring themselves back into power."

Unfortunately, the journalist warns, "these calls for the creation of a Maidan in Poland and EU intervention in order to 'restore democracy' are [also] sown on very fertile ground when it comes to the EU and Germany."

​In his piece, Stachnio interviewed award-winning Polish journalist Witold Gadowski, who told him that the threat of a coup against the PiS government is real, and that the political forces which could serve the interests of a 'Polish Maidan' are already in place.

Heralded by Politico as "The man who hopes to unseat Poland's new government," Gadowski has a different view on Petru's significance as one of the key figures in the 'resistance movement' against the PiS.

"If a few months before parliamentary elections, a force appears which has access to huge money and great media support, then there can be two interpretations – a) that we are dealing with some genius who has found a way to instantly create an incredible political career in Poland, or b) that they have support from people hidden behind the scenes."

Another weekend, another anti-government protest in Warsaw. pic.twitter.com/T2KhFF5Ea7

​"In Poland today," Gadowski notes, "we have to deal with an alliance between the special services and oligarchs with access to large capital. It is not by chance that we are dealing with the sudden appearance of a leader who comes from the banking community."

EU Plays Down Spat With Poland Over Fears of Inflaming Euroskeptics
"All of a sudden, there is a new force gaining momentum; there is a new man who was not previously involved in the foreground of political battles. This force immediately receives support from business and media, and immediately comes into parliament. Hence, it seems to me that Mr. Ryszard Petru of the Modern Party is a very carefully selected figure."

Asked by his interviewer how the movement which includes Petru, ostensibly charged with 'protecting democracy', has managed to unify part of the country's population into protests against the government, Gadowski suggests that there are two elements, most important of which is a skewed understanding of democracy by PiS's opponents.

"When analyzing this type of phenomena, it is important to ask who is the group which drives events…The number of frustrated people ready to go out into the streets is always high, and [they are] willing to march under any banner. These people are simply unhappy."

However, "such a disordered rebellion can head in the right direction if a group that will drive this momentum forward is found. It is not about this or that leader, but about a group who become the beneficiaries of such influence…This [driving force] operates under great stress, because if we implemented checks of what has taken place in the last eight years [under the previous government], a lot of pathology would come to light, and these pathologies correspond to real people – people who have a lot to fear, and hence are willing to spend a great deal of money to organize protests which are trying to overthrow the new government."

Nazi Crimes Invoked in Spat Between Germany and Poland Over Law Reforms
"Today," Gadowski warns, "we can see that these attempts to swing the public mood and get people on the streets have gone as far as trying to organize some form of international blackmail against the Polish authorities. It is shamelessly being done by the same people who lost power recently."

Ultimately, the journalist suggests, the problem with the forces organizing the protests stems from the fact that they "understand democracy in a very caricatured way. To them, democracy is when they govern, and if they lose in democratic elections, they call for foreign support to come in and save their careers."

"Who do they want to take measures against? The Poles who chose a different government than before? In that case, who are these people? If the current government has enemies among people such as George Soros, I'd rather be on the side of those who are being attacked. This government has only ruled for thirty days and has not done all that much. Therefore, there is no reason to raise such a clamor in Europe and the world."

Recently, Stachnio recalled, former Belgian Prime Minister Guy Verhofstadt, the leader of the Alliance of Liberals and Democrats in the European Parliament, called the PiS government 'Nazis', and suggested that PiS leader Jaroslaw Kaczynski, together with Hungarian Prime Minister Viktor Orban and Russian President Vladimir Putin, were "destroying European unity and the rule of law."

Euro Lawmakers Slam Polish Government Over Media and Constitution Reforms
Asked by his interviewer whether the statements of European politicians, combined with pressure by 'civil society organizers' such as George Soros, might combine with internal pressures and "lead to a repetition of Maidan and the Kiev scenario in Warsaw," Gadowski suggested that everything depends on the "maturity" of Polish society.

"It's hard to listen to the lectures of a representative of a country which has legalized euthanasia for children, the representative of a country which cannot cope with the antagonisms that are growing between the Flemish and the Walloons," the journalist complained. "Somehow, nobody is calling for EU intervention in Belgium, where the Flemish Front is making ever-louder quasi-fascist statements."

In any case, Gadowski noted, "as we saw in the Ukrainian Maidan, the involvement of big money in triggering certain social crises has an effect. If huge amounts of money begin flowing into Poland from abroad, it may actually lead to social unrest. It is a matter of maturity and responsibility of Polish society whether it allows this to happen or not."

In the final analysis, the journalist suggested, the radicalized opponents of the PiS government must learn, like the opposition forces in other countries who have emerged from totalitarian rule, to accept democratic principles.

"These people," Gadowski noted, "are accustomed to using totalitarian benefits and indeed, over the last twenty-five years, Poland was run as a sort of 'soft totalitarianism', because political correctness ruled and those who refused to be politically correct were second-class citizens, exiled to the margins of society. So people who became accustomed to totalitarian tendencies can now spout platitudes about democracy and about how Warsaw needs its own Maidan. What these people need is simply to learn to live in a democracy, but a real, and not declarative democracy."