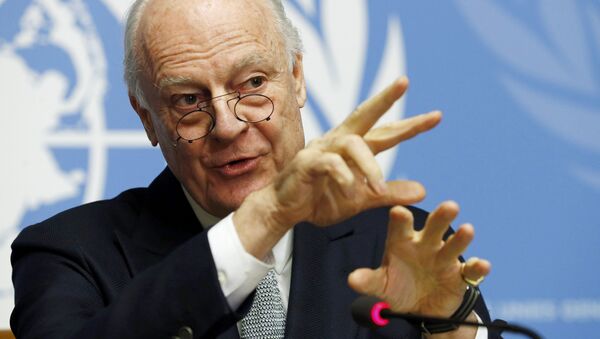 UN Special Envoy for Syria Staffan de Mistura said that one of the conditions before convening the intra-Syrian dialogue in Geneva is a "real ceasefire and not just local."

World
Talks Between Syrian Government, Opposition to Begin January 29
GENEVA (Sputnik) – A ceasefire with the Islamic State (ISIL), also known as Daesh jihadist group and the Nusra Front affiliate of al-Qaeda is not on the agenda ahead of talks between Syrian government and opposition members, UN Special Envoy for Syria Staffan de Mistura said Monday.

De Mistura announced Friday, January 29, as the date for the much-anticipated talks.

"It’s clear by all those who were attending the Vienna process and also the Security Council meeting that the suspension of fighting regarding ISIL in particular and al Nusra is not on the table," he said, using an alternative acronym for the terrorist organization banned worldwide, including in Russia.

Syrian Opposition Member Urges UN to Advance Intra-Syria Talks
He said there were "plenty of other suspensions of fighting that can take place" before adjourning the session.

One of the conditions before convening the intra-Syrian dialogue in Geneva is a "real ceasefire and not just local," de Mistura stressed.

The envoy said he planned to begin issuing invitations to delegates on Tuesday.