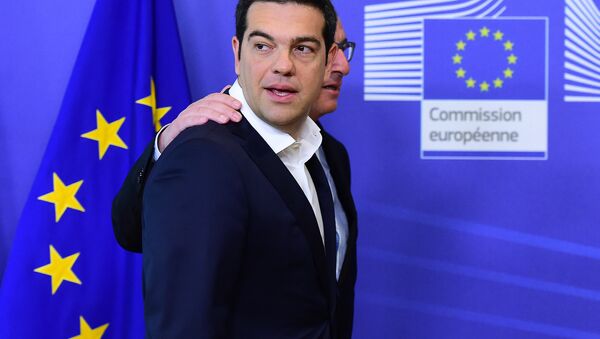 © AFP 2023
Subscribe
International
India
Africa
A year ago, Alexis Tsipras and the left-wing Syriza party were voted to lead Greece out of austerity. Six months later, the Greek PM admitted defeat and signed up to Troika's demands to keep the country in the Eurozone. On the anniversary of Tsipras’ leadership, questions are being asked as to what the Syriza government has achieved for Greece.

A year later and the Mediterranean country is said to be facing its biggest challenge yet: bonds are sinking and negotiations with the Troika are expected to be tense.

Tsipras wants to pass reforms to the country’s social security system by raising contributions — the Troika say Greece must make the cuts the pension system. In response, ferry drivers and farmers have announced strike action. 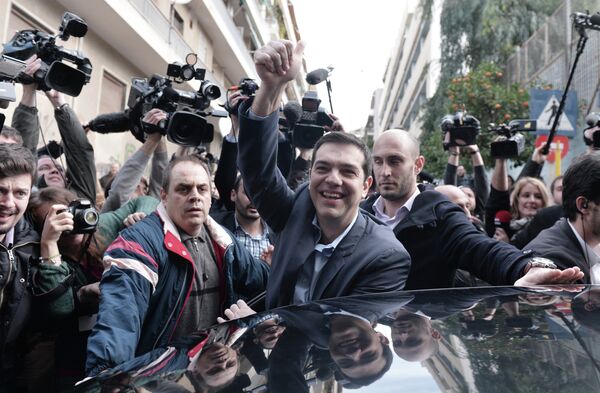 The leader of Greece's left-wing Syriza party Alexis Tsipras waves as he leaves after voting at a polling station in Athens on January, 2015.
© AFP 2023 / Louisa Gouliamaki

"The most important achievement of the Syriza party is the effect it has had on left wing governments in Portugal, Spain, France and Italy," Stelios Kouloglou, independent MEP and member of the Confederal Group of the European United Left told Sputnik, starting on a positive note.

"In Greece, there hasn’t been a spectacular change. The last six months were consumed by negotiations with creditors who basically blackmailed Greece into submission. The achievement of the Troika served European interests, not Greece."

Kouloglou says the Troika always intended to make an example of Greece. "The goal was to overthrow the left-wing government and to make a stance that no such government can stay in the Eurozone; but this has not been fully achieved by the Troika. 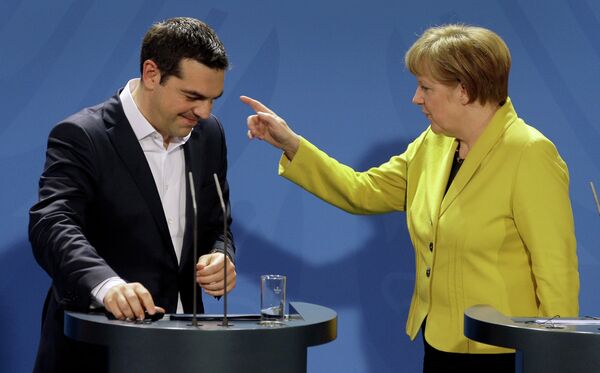 German Chancellor Angela Merkel (right) and the Prime Minister of Greece Alexis Tsipras (left) at a press conference following talks at the chancellery in Berlin, on March 23, 2015.
© AP Photo

"The silent coup d’etat did not work – but it did succeed in forcing the Syriza party to implement policies that it was against before it was elected," Kouloglou said.

"The Syriza party had to accept an even harder program that the one the previous government had implemented."

And as negotiations loom, Kouloglou predicts that Tsipras will be forced to implement an even tougher program.

"Despite the fact that Tsipras implemented the austerity program imposed on him — they are still not satisfied. They still want more. And they want to use Greece as a scapegoat for all the bad things in Europe."

And it’s not just economic challenges that Tsipras faces. Kevin Featherstone, professor of contemporary Greek politics at London School of Economics told Newsweek that Tsipras faces a challenge to his leadership from new opposition chief of the conservative New Democracy party, Kyriakos Mitsotakis, who is much more popular in Berlin and Brussels.

Reflecting on 1 year of #Syriza in government, for Greece and for Europe pic.twitter.com/jL5sfqpOT0

According to Featherstone, Mitsotakis is a "far stronger political opponent" than his predecessors, one who "would offer a real alternative" to voters.

A recent opinion poll carried out by ProRata revealed that support for Syriza and New Democracy parties are almost the same with conservative New Democracy on 19 percent and Syriza on 20 percent.

The fact that @syriza_gr is literally celebrating 1 year in power is beyond common sense. Hip hip hurray for complete failure!!?!! #syriza

According to a New Democracy spokesperson:

Tsipras also faces a backlash from unions following the drastic cuts to the pension system. "It is absolutely knife edge, whether Tsipras will be able to pass the new measures through parliament," Featherstone told Newsweek.

"Add to this the refugee crisis gripping all of Europe and the outcome for Greece remains uncertain," Kouloglou told Sputnik.

"The situation in Europe is getting worse and worse. The European Union and the Eurozone are falling apart. Nationalistic right-wing policies are being implemented and countries like Denmark and Sweden famous for their hospitality and tolerance are turning their backs on refugees."

"Who would have expected Denmark to adopt a policy of confiscating asylum seekers’ property to pay for their stay in the country?"

We exposed the democratic deficit in Europe. We gave voice to the 99% #syriza

A year on from Tsipras’ rise to power and dramatic fall from grace, the mood in Greece, according to Kouloglou remains more pessimistic than optimistic and the creditors are continuing with the same hard line that they are not willing to help the Greek government.

"The Troika intend to punish Greece, so the country still has to wait and see what the outcome will be."

Meanwhile Greek finance minister Euclid Tsakalotos, predicts that there will be "victories and defeats" over the next two years.

Overheard on Athens metro "We're like guy with heart disease who's put on chemo. #Greece is finished. That toerag [Tsipras] is same as rest"

Be it over money or leadership — the battle is on.