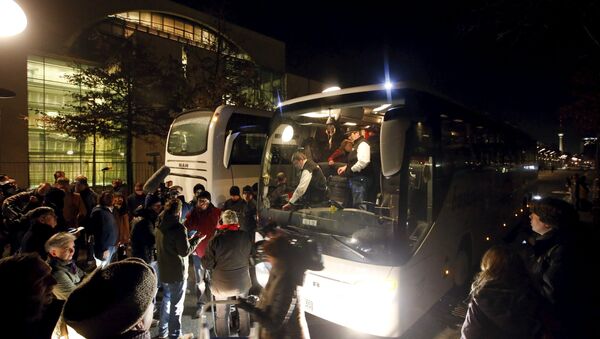 Bavarian Prime Minister Horst Seehofer announced his intentions to file a lawsuit within Germany’s Constitutional Court if Merkel failed to restore order at the German borders.

Infighting? Germany's Ruling Coalition Deeply Divided Over Migration Policy
BERLIN (Sputnik) – The Bavarian authorities are ready to file a lawsuit should the government of German Chancellor Angela Merkel fail to react to a document on the immigration policies in the country they had compiled, Bavarian Prime Minister Horst Seehofer said Monday.

Earlier this month, Seehofer announced his intentions to file a lawsuit within Germany’s Constitutional Court if Merkel failed to restore order at the German borders.

Seehofer told a press conference on Monday that the six-page document will be passed on to the federal government Tuesday for consideration.

"There will be a lawsuit if there is no appropriate reaction," the prime minister said.

'No More Friendly Face': German Transport Minister Wants Border Controls
Authorities in the southern German state of Bavaria threatened in October to take the federal government to court if it does not act to curb the record inflow of refugees into the country.

Seehofer has been firmly opposed to Merkel’s refugee policy. Earlier this month, he said that Germany could cope with no more than 200,000 arrivals a year.