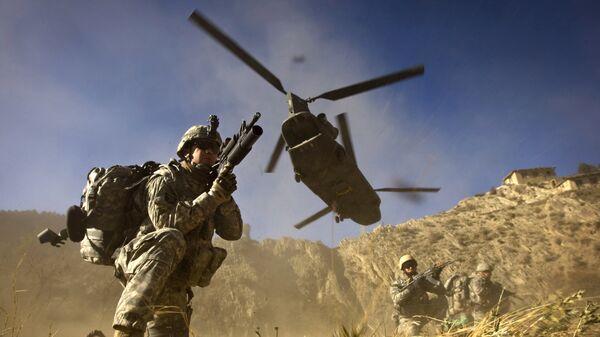 © AFP 2021 / FILES DAVID FURST
Subscribe
The Pentagon has announced it will soon launch a boots-on-the-ground mission against Daesh militants in Iraq and Syria. The storied 101st Airborne Division will be deployed for the operation. President Barack Obama will need authorization from Congress for the operation.

On Friday, US Defense Secretary Ashton Carter wrote an article for Politico, saying it is time to accelerate military efforts against the Daesh terrorist group. Carter announced the US would launch a boots-on-the-ground operation against the militants.

The 101st Airborne Division will soon deploy 1,800 troops to Iraq to aid in the fights against Daesh.

"They will head there with the support of the American people and armed with a clear campaign plan to help our allies deliver the barbaric organization a lasting defeat," Carter wrote.

According to the secretary, he has already discussed the plan with US Central Command and commanders of the division.

US Defense Chief Says Coalition Will Put Boots on the Ground in Syria, Iraq
The objective is to force Daesh militants from their two power centers in Mosul, Iraq and Raqqa, Syria. These cities constitute Daesh’s military, political, economic and ideological centers of gravity, he wrote.

He stressed that the most important mission is to "protect the homeland."

The 101st Airborne Division is one of the most highly decorated units in the US Army and has been featured prominently in combat action. It is a light infantry division of the Army trained for air assault operations.

The unit is also known under the nickname "Screaming Eagles." Its headquarters is located at Fort Campbell, Kentucky.

Originally named the 101st infantry division, the unit was formed in July 1918. As World War I ended several days later, the division was demobilized in December 1918. In 1921, its headquarters was reconstituted and organized in September 1921 with reservists, most of whom were called into service after the war broke out. The reserve division was later disbanded in August 1942, and reconstituted as the 101st Airborne Division.

During World War II, the division was renowned for its role in Operation Overlord (the D-Day landings and airborne landings in Normandy, France), Operation Market Garden, the liberation of the Netherlands, and its action during the Battle of the Bulge, in 1944-1945.

In 1957, during the Little Rock Crisis, troops of the 101st Airborne Divisions were deployed to escort students into the segregated school in Little Rock.

Boots on the Ground: Does Daesh Pose an Existential Threat to US?
During the Vietnam War, elements of the 101st Airborne Division took part in 15 campaigns. Most notable among these are the Battle of Hamburger Hill in 1969 and Firebase Ripcord in 1970.

The division is also known for its role in the Persian Gulf War during which they sustained no soldiers killed in action, as well in the war in Afghanistan and the 2013 invasion of Iraq. In 2014, the 101st Airborne Division Headquarters deployed to Western Africa to help contain the spread of the deadly Ebola virus.

Among the notable members of the unit was Joseph Beyrle, the only American soldier to have served both with the US Army and the Soviet Army in World War II, and father of former US Ambassador to Russia John Beyrle. As well, iconic guitarist Jimi Hendrix completed paratrooper training with the division in 1962, but was discharged soon after.

Currently, the division contains over 16,000 personnel. It comprises three infantry brigades, an artillery division, and a combat aviation brigade. The unit is armed with powerful 105-mm howitzers and AH-64 Apache attack helicopters.

In his article, Carter did not specify what weapons will be engaged by the division for its anti-Daesh mission.

Currently, only a small-scale military operation can be expected, Yaakov Kedmi, former head of Israel’s Nativ intelligence service, told Gazeta.Ru. "This is about a small operation. A large-scale mission is prohibited by American laws," he said.

In order to start a full-fledged military invasion against Daesh, President Obama has to receive authorization from the Republican-dominated Congress. Previously, Republicans have refused to approve a major operation which could damage the party’s reputation in the presidential campaign.

US-Led Coalition Against Daesh Launches 17 Airstrikes in Iraq, Two in Syria
Despite Carter’s words about "the support of the American people," the majority of Americans are against military actions in Iraq which are reminiscent of the unpopular Iraqi campaign during George W. Bush’s presidency. An operation in Iraq poses a risk for the president. Despite the fact that Obama will leave office by the end of the year, if the operation fails it would seriously damage Hillary Clinton’s chances for presidency.

Without Congress’ consent, Obama can only deploy a small number of troops for special operations. According to the War Powers Resolution of 1973, the US President can send US Armed Forces into action abroad only by declaration of war by Congress. It requires the President to notify Congress within 48 hours of committing armed forces to military action. Armed forces are forbidden to stay on combat mission for more than 60 days without Congress’ authorization. The period can be prolonged for another 30 days at the request of the President.

While the US has its own bases in Iraq with small contingents and thus the positions of its forces are strong, in Syria its actions have been limited to airstrikes. The Russian Aerospace Forces have also been carrying out airstrikes against Daesh in Syria, but at the request of President Bashar Assad. Moscow has repeatedly said it has not considered a ground offensive in Syria.

Coordination between US and Russian troops in Syria has been minimal, representatives of both the Pentagon and the Russian Defense Ministry have said.

Kedmi said that if Washington starts an operation in Syria a collision between US and Russian troops cannot be ruled out. To avoid such incidents, full-scale coordination between Moscow and Washington is crucial, he underscored.

"If such an incident happens it should not be turned into a political conflict, especially taking into account the fact the Pentagon doesn’t want a war with Russia," the expert pointed out.

He added that it was the Russian advances in Syria that prompted the US to announce a boots-on-the-ground operation against Daesh.

"The Pentagon is pursuing one goal – to prevent Moscow from taking advantage of its airstrikes in Syria. The US is rather concerned about Syria, not Iraq. It doesn’t want to acknowledge this so its statements are focused on Iraq," Kedmi said.

Alexander Khramchikhin, head of the Institute for Political and Military Analysis, shared this assumption. According to him, Carter announced putting boots on the ground because Washington has realized that its airstrikes are not effective enough.

"Daesh is alive and kicking, but the US can’t do anything about it. What is more, Russia has emerged as a major player in the region. So the US has to react in some way. I think at most one brigade will be deployed," he said.

"However, the Pentagon will not send a contingent enough to defeat the terrorists. And a small number of troops will lead to losses and public outrage in the US," the analyst added.

A US ground operation against Daesh may also be aimed at provoking Russia to do the same, Khramchikhin said.

"The US doesn’t want to lose, and it also doesn’t want Russia to improve its reputation. This is why Americans are joining the game. But a ground operation can only be successful if it is coordinated with the Syrian Army and Russian forces," Leonid Ivashov, head of the Academy for Geopolitical Issues, told TV channel Zvezda.

Russian officials have not yet commented on Carter’s announcement. However, earlier Moscow repeatedly underscored that any operation of the kind should be authorized by the UN Security Council. Russian President Vladimir Putin said Russia’s airstrikes in Syria are legitimate since they were started at the request of the Syrian government.

But it cannot also be ruled out that Russia would turn a blind eye to the US offensive. This is highly possible if US actions are concentrated in Iraq which has de facto turned into an area of Washington’s responsibility.

Dream Team: Daesh's 'Reign of Terror' Collapsing Thanks to Russia, Syria
Last year, Moscow refused to engage in combat actions against Daesh in Iraq, despite numerous requests from the Iraqi government. Currently, there is an anti-Daesh coordination center in Iraq, established jointly by Russia, Iran, Iraq and Syria.

Another reason that could prevent Russia from taking its military operations in Syria to the next level is Washington’s pledge to lift anti-Russian sanctions. Initially, the possibility was announced by US State Department Coordinator for Sanctions Policy Daniel Fried on January 15. He named the main condition for sanctions to be lifted – the full implementation of the Minsk agreements to resolve the crisis in Ukraine. On January 22, State Secretary John Kerry confirmed Fried’s words.

Carter’s article in Politico was published several days ahead of peace talks between the Syrian government and opposition in Geneva. According to Gulf State Analytics expert Theodore Karasik, a ground operation would boost the opposition’s prominence at the talks.

000000
Popular comments
What part of not invited does the US not understand?
anne00marie
24 January 2016, 13:15 GMT4
000000
"The Pentagon is pursuing one goal – to prevent Moscow from taking advantage of its airstrikes in Syria". Well you're against Russia-Syria's advances then.. which was obvious.. By "protecting your homeland" well staying at "home" (even if it was stolen to the Natives but that's another story) is wiser.