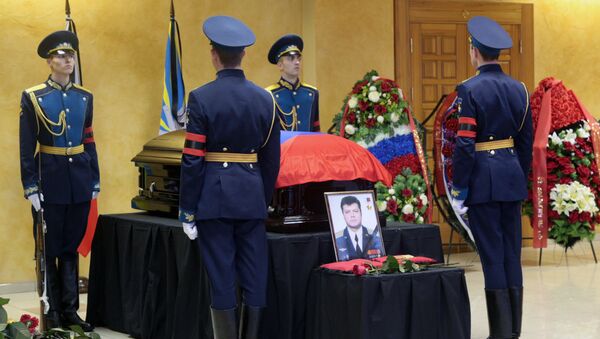 © Sputnik / Uliana Solovyova
/
Go to the mediabank
Subscribe
International
India
Africa
Several fighters of the Syrian militia involved in the offensive in the north of Latakia wore T-shirts with a portrait of Russian Lieutenant Colonel Oleg Peshkov, the pilot of the Su-24 bomber downed by the Turkish Air Force in November.

Russia Awards Syrian Special Forces for Saving Su-24 Co-Pilot
The Russian Su-24 was shot down by a Turkish F-16 jet over Syria on November 24, falling 4 kilometers (2.5 miles) from the Turkish border.

Su-24 pilot Lieutenant Colonel Oleg Peshkov killed by fire from the ground after ejecting from a Russian Su-24 jet downed by Turkey over Syria was posthumously awarded with a Gold Star medal, Russia’s highest honorary title.

Russia
Turkish Businessman Donates His Profits to Family of Killed Su-24 Pilot
The commander did not specify where the fighters purchased the T-shirts with the portrait of the Russian pilot, but he noted that he supports the initiative of his subordinates.

As the Syrian army backed by popular defense groups continuous its fight against terrorists, it was reported that the army recently managed to gain control over the strategically important town of al-Rabea’a and the village of al-Rawda in the Latakia province near the border with Turkey.

Similarly, last week it became known that, with the support of the Russian air force, the Syrian army was able to establish control over the city of Salma, after it had been in the hands of terrorists for the past four years.