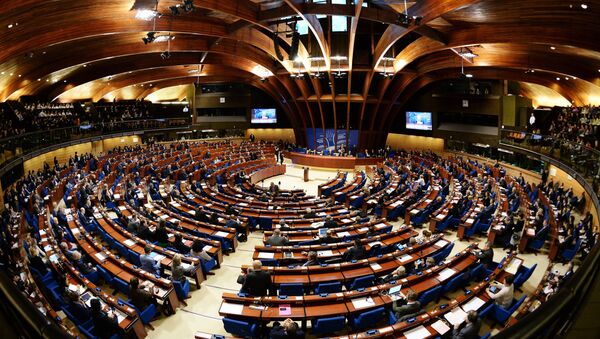 International terrorism, the ongoing refugee crisis in the EU and the functioning of democratic institutions in Poland will be in the limelight of the Winter Session of the PACE, which kicks off in the French city of Strasbourg on Monday.

STRASBOURG (Sputnik), Daria Chernyshova — From January 25 to 29, the lawmakers from European countries will present reports and adopt resolutions related to the most pressing international issues.

The Assembly will also elect its new president for a one-year term.  Spanish lawmaker Pedro Agramunt, who is the only candidate, is widely expected to replace incumbent Anne Brasseur.

On terrorism, the reports entitled "Foreign fighters in Syria and Iraq" and "Combating international terrorism while protecting Council of Europe standards and values" will be presented during the session. The two reports raise a wide range of issues mainly related to the activities of the Daesh terrorist group, such as foreign fighters who leave European countries to join the terrorists in Syria and Iraq. The reports also suggest ways to step up global response to the problem.

Russia’s Absence From PACE Not Sign of Cutting Ties With Council of Europe
The crisis of refugees and migration in Europe will be addressed in the reports "The Mediterranean Sea: a front door to irregular migration" and "Organised crime and migrants."

The reports highlight the urgent need for a common European response to the problem, yet note that the debate cannot be limited to the question of quotas and their compulsory or voluntary nature.

The lawmakers will also discuss the problems migrants encounter on their way to Europe — the high death toll in the Mediterranean, and migrant smugglers.

According to Conde, in Kosovo, democracy faces numerous delays and deadlocks in the legislative work, and "endemic and widespread corruption negatively impacts the lives of people in Kosovo and holds back Kosovo’s economic development."

The lawmaker made a two-day fact-finding visit to Pristina in October 2015 in preparations for the report.

The PACE delegates will address the issue of functioning of democratic institutions in Poland, which has faced a barrage of criticism recently over a number of controversial laws adopted by the country's authorities, namely  controversial regulations that widen powers of the country's security services, a media law giving the government power to appoint the heads of public television and radio and a reform appointing five additional judges to the tribunal.

Russia Able to Partake in PACE in September After Parliament Elections
This year, the delegation of the Russian Federation decided not to present the credentials at the 2016 first session, which means it would not be able to participate in the work of the Assembly throughout 2016, or until the next parliamentary elections in September.

The head of the PACE Monitoring Committee, Stefan Schennach, told Sputnik he regretted the decision, which was a no-win situation for Moscow, PACE and Ukraine.

"But we have to find solutions and movements, for that we have to talk together," Schennach added.

Meanwhile, Alexei Pushkov, the head of the Foreign Affairs Committee of the lower house of Russia's parliament, said absence of the Russian delegation did not necessarily mean the cessation of contacts with the Assembly as Russia is still represented in the Committee of Ministers of the Council of Europe at an ambassadorial level and the Russian mission in Strasbourg continues its work as well.