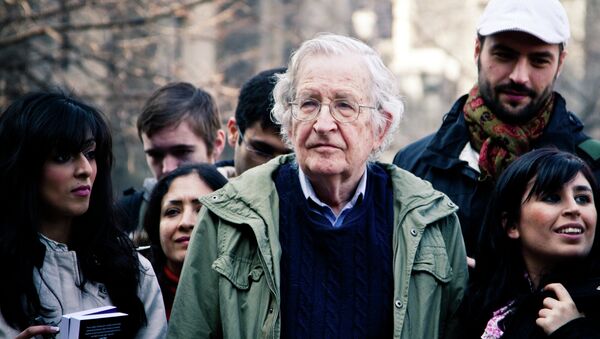 To protect the Kurds and Yazidis from genocide carried by Daesh (Islamic State) terrorists in Syria, one needs to support Kurdish forces fighting against the jihadist groups, renowned US Professor Noam Chomsky told Al Jazeera’s political commentator Mehdi Hasan during an episode of UpFront.

Although the US government has been supporting some Kurdish groups in Syria, it must work with the Kurdistan Workers' Party (PKK) as it is this Kurdish organization which has been primarily responsible for defending Yazidis and Kurds from Daesh, Chomsky said.

"They [Daesh] are killing Yazidis. What do you do? You support the people who are saving the Yazidis, who happened to be in the US terrorist list," Chomsky told Al Jazeera.

Chomsky added that when it comes to fighting Daesh and protecting minority groups, such as Yazidis and Kurds, in Syria and Iraq, airstrikes against the Sunni terrorist group are a legitimate action.

Turkey Conducts Airstrikes Against Kurdish Positions in Northern Iraq
If it's straightforward in regards to Daesh — they're the bad guys and airstrikes against them are legitimate — the problem arises when it comes to other terrorist groups, such as al-Nusra Front. Turkey, Saudi Arabia and Qatar openly support al-Nusra Front, which is in fact no different from Daesh, Chomsky said.

"The Kurds have to defend them [the Yazidis] against al-Nusra Front too," Chomsky said, pointing out that the Turkish government openly supports al-Nusra Front, which creates a big problem.

Turkey, the US ally in the Middle East, has been brutally suppressing the Kurds. Chomsky said that if the United States is truly interested in defeating Daesh and protecting the Yazidis, it should tell Ankara to stop attacking the PKK.

"If you want to defend the Kurds you cannot be attacking the Kurds," Chomsky explained in a straightforward manner.

When asked whether the United States and its allies can fight Daesh, forces loyal to Syrian President Bashar al-Assad and other terrorist groups in the country all at the same time, Chomsky said that it's essential that the US government and its allies need to set their priorities straight and concentrate on Daesh and other terrorist groups in Syria to effectively solve the crisis.

Turkey 'at War Against Assad' to Resolve Kurdish Issue – Ex-CIA Officer
"You cannot fight both sides, which are attacking one another, it's an incoherent strategy, so you have to concentrate on what you're doing," Chomsky stressed.

Although the US Professor himself is not a fan of al-Assad, he still thinks that the only way to fix Syria is to negotiate with the current government.

Syria has been in a state of civil war since 2011, with government forces fighting opposition factions and militant groups.