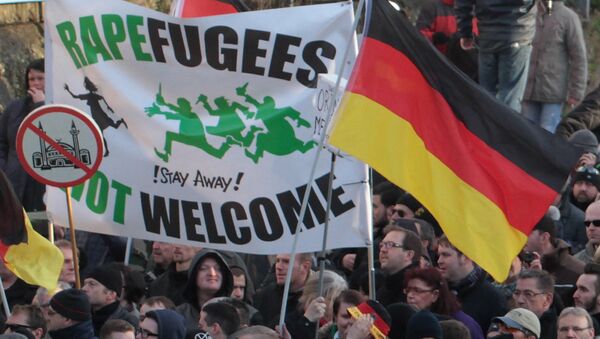 According to the report, 27 such incidents were registered in Bavaria, most of them in Nuremberg and Munich. In Bremen, there were 11 reports, in Berlin six and in Baden-Wurttemberg 25.

In Hesse, there were 31 cases of sexual assault, sexual insults, thefts and attempted thefts. The report said that Hamburg and the state of North Rhine-Westphalia had the highest number of offenses with 195 complaints filed in Hamburg alone.

A total of 1,076 crimes were reported in North Rhine-Westphalia, mainly in Cologne, Dusseldorf and Bielefeld including 692 cases of bodily harm and thefts and 384 sexual assaults.

Forty-three such incidents were reported in Lower Saxony, Brandenburg, Saxony, Rhineland-Palatinate and Saarland.

The attackers were reported as being men of Moroccan, Algerian or Tunisian descent aged between 17 and 30.

Guns Laws: May Firearms Sales Stop Wave of Sex Attacks in Germany?
A team of “super recognizers" from Scotland Yard so named for their unique ability to pick out faces in a crowd, have been asked by Cologne police to analyze video footage of the New Year’s Eve attacks, DW reported.

Meanwhile, the number of victims involved in the New Year's Eve attacks in Cologne has increased to 1,049 people, Interior Minister of North-Rhine Westphalia Ralf Jaeger said in a report published Thursday.

Dozens of women were robbed, sexually assaulted, and raped on New Year's Eve in Cologne by groups of aggressive men, mostly of Arab and North African appearance.

The report also revealed that not only women had been attacked on New Year's Eve in Cologne. Eighteen percent of victims were male.

The mass attacks in Cologne have casted doubt on Germany's open-door migration policy.