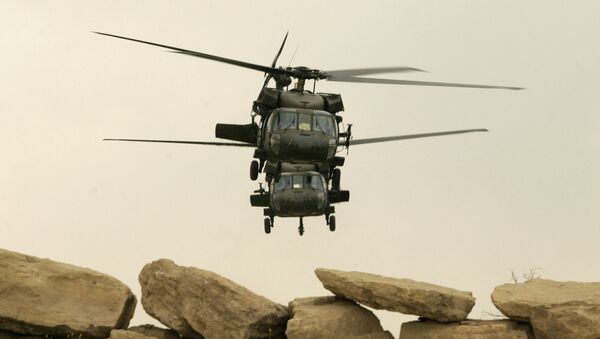 Controversy is still simmering over the US taking control of the Syrian Rmeilan airfield in the northeastern Syrian province of al-Hasakah, near the Turkish and Iraqi borders; although CENTCOM says the US is not controlling "any airfield in Syria," satellite images and reports from the ground suggest the opposite.

US Expanding Disused Airstrip in Kurdish-Controlled Syria
Citing the London-based Syrian Observatory for Human Rights (SOHR), Dave Majumdar, the Defense Editor of The National Interest, reports that American special operation forces have taken the Rmeilan airbase in northeastern Syria several weeks ago. According to SOHR, the base's infrastructure is being expanded; US helicopters have been spotted using the base.

"The US forces currently operating at Rmeilan might include US Air Force Special Tactics Squadron operators, such as combat controllers, pararescue jumpers and special operations weathermen," Majumdar suggests in his article.

"Special tactics squadron airmen — particularly combat controllers — are often embedded with US Army Special Forces and US Navy SEAL units. The aforementioned helicopters could be from the US Army's 160th Special Operations Aviation Regiment — which is an elite unit tasked specifically to support top tier special operations units," the journalist underscores.

The London-based SOHR is not the only source reporting on the US maintaining control over the Rmeilan airbase.

​"Under a deal with the YPG, the US was given control of the airport. The purpose of this deal is to back up the SDF, by providing weapons and an airbase for US warplanes," the SDF spokesperson said.

On January 22, however, a spokesman of the United States Central Command (CENTCOM) "denied that US forces have taken control of any airfield in Syria" in an interview with Al Jazeera.

​"Before the war, the airfield was an agricultural airstrip used by the Syrian government. As such, its runway was only 2,300 feet (700 meters) long, a length that appears to be doubling," Stratfor's report elaborates.

Russian Air Campaign Changes Course of Anti-Daesh War in Syria
The report assumes that the expanded airfield would accommodate larger aircraft which would help the SDF to conduct all-out offensive operations.

"The US involvement in al-Hasaka province would not be so unusual; the United States nearly always attempts to establish an air bridge to support the semi-permanent positions of the conflicts in which it operates," Stratfor's analysts emphasize.

Although the Pentagon has denied the reports regarding the US Special Ops deployed at Rmeilan, it is known that about fifty US military troops have been operating in Syria since December.

Though, theoretically, their role is limited to training and advising the so-called Syrian opposition forces on the ground, American Special Ops have also been directly involved in combat operations in the region, Majumdar stresses.

Syria's Third Largest City of Homs Arising From the Ashes of War
Furthermore, back in October US Defense Secretary Ashton Carter confirmed that the US special forces will continue to take part in direct combat missions in Syria and Iraq: "when we find opportunities to do things that will effectively prosecute the campaign, we will do that. I'm determined that we continue to adapt to get results."

"That raises the specter of the US special operations forces facing another Black Hawk Down moment in Syria," the journalist warns, referring to 1993's Operation Gothic Serpent in Somalia when US Army Rangers were caught in a massive ambush.

"As US special operations forces step up their activity in Syria — the isolated American forces face even greater risks than their forbears," he underscores.