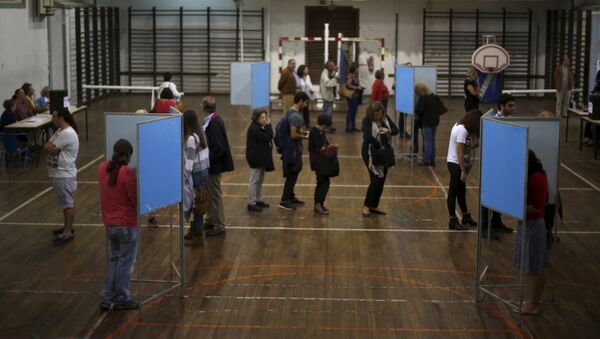 © REUTERS / Rafael Marchante
Subscribe
The Portuguese will go to the polls on Sunday to elect the president for the next five years.

MOSCOW (Sputnik) — The country will certainly have a new leader, because the incumbent Portugal President Anibal Cavaco Silva will not participate in the elections. He has already served two consecutive terms in office, and country's constitution prohibits him from nominating for the upcoming elections.

There are 10 candidates for the presidential race, including the ones supported by country's political parties, as well as independent nominees. The number of candidates is the record one in the decades-long Portuguese democracy.

The frontrunner in the election is Marcelo Rebelo de Sousa supported by the Portuguese Social Democratic Party (PSD), Democratic and Social Center – People's Party (CDS-PP) and the People's Monarchist Party (PPM). According to the polls published on Friday, he could gather support from 51 to 55 percent of voters and win in the first round.

Incumbent Portuguese Prime Minister Antonio Costa of the Socialist Party (SP) calls on voters to support either former head of University of Lisbon Sampaio da Novoa or former SP's leader Maria de Belem. They are expected to get some 17 and 12 percent of voters' support respectively.

The Left Bloc party is represented by the member of the European Parliament, Marisa Matias, while the country's Communist Party supports Edgar Silva.

The voters could also cast their ballots in support of independent candidates, who are not backed by any party, such as former SP members Henrique Neto and Candido Ferreira, anti-corruption activist Paulo de Morais, psychologist Jorge Sequeira or participant of several reality shows Vitorino Silva.

The vote begins at 8 a.m. local time (which coincides with GMT) and lasts until 7 p.m. without interruption.

If no one wins in the first round, the second round is expected to be scheduled for February 14.

000000
Popular comments
Looks like elsewhere in Europe with what Tariq Ali calls the extreme centre, meaning that it without blinking an eylid, such centre governments can form conservative-social democratic coalitions that seemed impossible a few decades ago, uphold austerity policies under such coalitions as well as under the leadership of either of the centre parties, exploit the internal divisions of the left and the egos of the independent candidates. Only lucky that Portugal apparently has not got any nasty anti-immigration parties like the AfD.