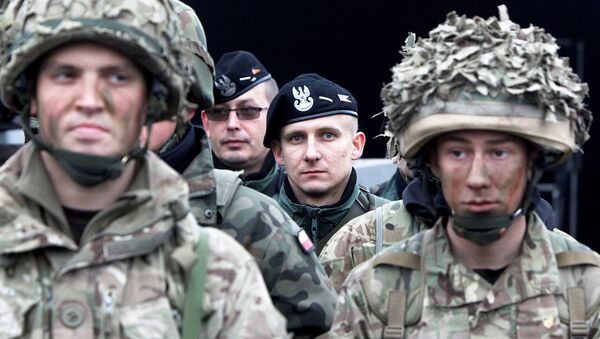 Britain has denied claims by Poland's Defense Minister that it would deploy 1,000 troops to the East European country bordering Russia on a permanent basis, in contravention of an agreement made in 2007 not to build up conventional forces in the region, Sputnik News has been told.

As part of an ongoing NATO commitment to place troops and resources in the Baltics and Eastern Europe, the UK announced on January 20 that it would "commit nearly 1,000 personnel to NATO exercises taking place in Poland".

In a statement, it said:

Poland's Defense Minister Antoni Macierewicz told Radio Maryja on Friday that Poland and Britain had agreed that troops would stay in Poland permanently. It followed a meeting between UK Defense Secretary Michael Fallon and Macierewicz in Edinburgh, Scotland. Macierewicz said:

However, Sputnik News has confirmed with a source at the British Ministry of Defense that the 'permanent' deployment – even on a rotational basis – is incorrect. A source said the reports were false and that the UK was merely deploying for the purposes of NATO exercises.

Any permanent deployment of forces would be in breach of the Treaty on Conventional Armed Forces in Europe, signed in 1990 in Paris after the end of the Cold War signed by the member States of NATO and Russia which provided for the prevention of "any potentially threatening build-up of conventional forces in agreed regions of Europe, to include Central and Eastern Europe".

Warsaw has been keen on pushing for more NATO forces to be permanently deployed on its ground, but many western NATO members have been wary of breaching the terms of the Paris treaty.

Nonetheless, NATO has been in the habit of skirting the margins of the 'permanent' implication of the treaty by staging a long-running and rolling pattern of military exercises in the region.

According to the UK Ministry of Defense: "The frigate HMS Iron Duke will visit Poland as part of NATO’s Standing Naval Maritime Group this summer. The helicopter carrier HMS Ocean will also participate in Exercise BALTOPS in the Baltic Sea over the summer and a Royal Navy minehunter is due to visit Poland in the autumn."

It follows last year’s NATO deployment of forces for the Allied Rapid Reaction Corps (ARRC) which, in November, trained for the first time in the Baltic States.

NATO’s website claims: "The ARRC is one of the nine High Readiness Headquarters which can be quickly dispatched to lead NATO troops on missions within or beyond the territory of NATO member states."