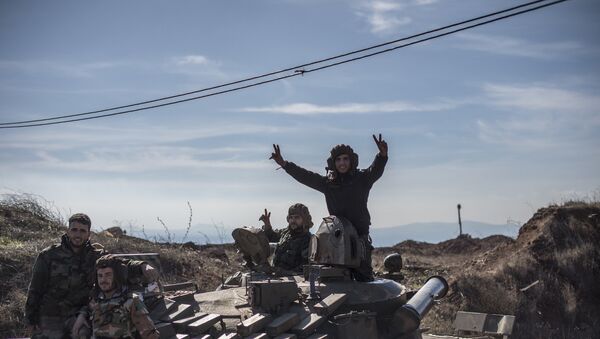 The Syrian army together with the country's air force destroyed numerous Daesh terrorists’ positions, and struck heavy casualties on different militant groups in several provinces in the last 24 hours.

Earlier in the day, the Russian General Staff said that the Syrian army has been conducting offensives "on ten fronts," while preparing military operations in three more directions.

The Syrian army pushed the militant groups back from more territories in Latakia province, taking back another village on the Western side of the seized town of Salma on Thursday. A number of militants were killed or wounded during the government forces' operation.

“Similarly in Aleppo, the Syrian army troops continued to strike the militant groups' strongholds in different parts of the Northern Province of Aleppo on Thursday, inflicting heavy damage and casualties on them,” FARS News agency reported.

Russian Airstrikes Help Syrian Army to Launch Offensive in 10 Directions
Several congregations of al-Nusra-linked terrorist groups were targeted in al-Sheik Lutfi village and al-Rashidin area in the southern outskirts of Aleppo city. According to reports, four vehicles and several retreats of terrorists along with arms and ammunition inside were destroyed.

A total of 150 terrorists surrendered themselves to the Syrian army in Damascus province, officials announced on Thursday.

The forces continued recapturing the Daesh-controlled areas across the central province of Homs, cutting off terrorists' supply routes.

“The Syrian army units and the popular defense groups established control over a number of strategic hills and heights, including Thaniet Rashed, in the Eastern side of Homs province,” FARS agency reported a field source as saying on Thursday.

On the same day some 42 wanted militants from Damascus and Damascus countryside; Tartous, Quneitra and Dara'a, turned themselves in to the authorities on Thursday.