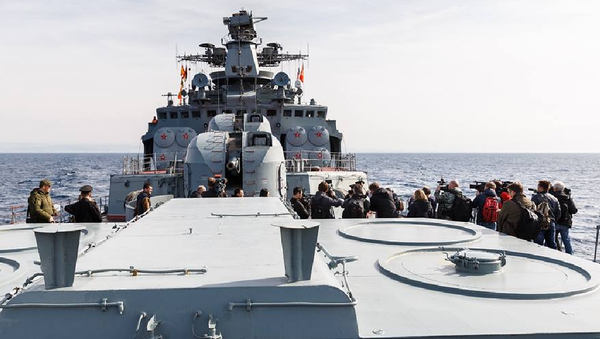 Russian and foreign reporters were given a rare opportunity to visit the Vice-Admiral Kulakov, an Udaloy-class destroyer that was recently deployed to the Mediterranean to assist Russian forces taking part in the counterterrorism campaign in Syria.

The Russian Navy showcased some of the warship's military equipment, including anti-submarine and anti-ship missiles, as well as its sea-based air defense system, known as Kinzhal (NATO reporting name SA-N-9 Gauntlet).

The Vice-Admiral Kulakov, which is assigned to the Russian Northern Fleet, is currently part of the Russian naval task force off the Syrian coast, led by the Varyag guided-missile cruiser. The naval group is tasked with providing air defense to Russian military planes stationed at the Hmeymim airbase in the Syrian province of Latakia.

The Russian warship we were on in the Med had 2 helicopters: 1 for search & rescue, 1 for locating enemy subs. pic.twitter.com/ThcWpKakmD

On the 'Vice Admiral Kulakov' destroyer, the torpedo tubes have double-headed Eagles on the front covers. pic.twitter.com/8YAWZPOMFk

​Russia has launched a multinational counterterrorism campaign aimed at tackling Daesh and other radical groups, which are trying to overthrow Syrian President Bashar al-Assad. The operation has been authorized by Damascus.