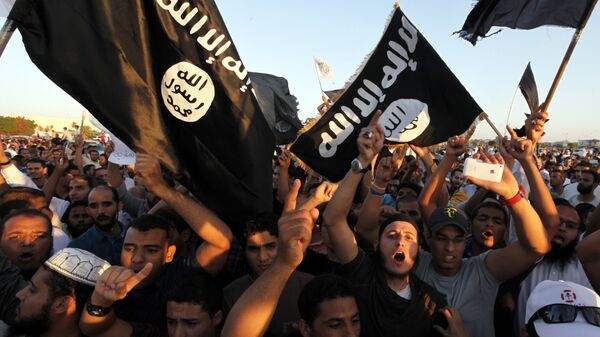 © AP Photo / File
Subscribe
International
India
Africa
Author and journalist Max Blumenthal told Sputnik Radio that he was not surprised to hear Israeli Defense Minister Moshe Ya'alon say that he would prefer the existence of Daesh in Syria to that of Iran.

Speaking at the Institute for National Security Studies conference in Tel Aviv on Tuesday, Ya'alon said Iran poses a greater threat than Daesh, and that if Syria fell, Israel would prefer that Daesh was in control of the territory rather than an Iranian proxy.

​Blumenthal, during an appearance on Sputnik Radio's "Loud & Clear," said Israel has grown closer to Saudi Arabia, the United Arab Emirates and other Sunni Gulf states through a shared "hysteria and panic" over Iran’s geopolitical ambitions.

"It's almost official policy that Israel prefers Sunni extremists to Hezbollah and their Iranian funders and supporters," Blumenthal said, "so I don't think anything that Ya'alon said was particularly shocking, except that he was so candid."

Israel's conflict with Hezbollah dates back to the 1980s, when Israel occupied a strip of land in southern Lebanon. The occupation continued until 2000, when Hezbollah, an Iranian-backed Shiite militia, launched an armed resistance.

"Hezbollah remains a real thorn in Israel's side," Blumenthal said. "Meanwhile, [Daesh] and its affiliates have not attacked Israel."

He cited reports of Israeli troops supplying the Nusra Front, an al-Qaeda affiliate, and Israeli hospitals treating Nusra fighters so they could return to the battlefield in Syria as "illustration of official Israeli policy that's being carried out below the radar."

Why Israel Prefers Daesh to Iran

Blumenthal called the Obama administration's foreign policy in the Middle East "schizophrenic," pointing out that the United States has labeled Daesh an existential threat, while simultaneously supplying unsurpassed foreign aid to Israel, a country which rejects the global anti-Daesh coalition.

The diverging interests of the United States and Israel are highlighted by Ya'alon's comments about Iran, a country which is benefiting from a US-backed nuclear deal seen by many as Obama's landmark foreign policy achievement, Blumenthal said.