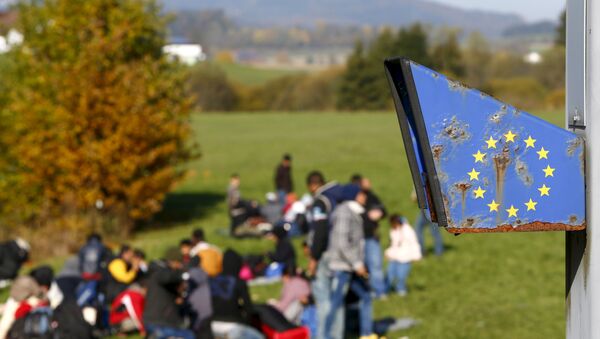 Earlier, de Maizière announced plans to prolong border controls for an undetermined period of time. According to chairman of the Union Jörg Radek, the police don't have enough staff to put this initiative into practice.

"We can afford it for a period of perhaps three weeks, but for a longer period we don't have enough human resources," Radek told the German newspaper Neue Osnabrücker Zeitung, adding that the law enforcement forces have almost reached their limits.

Refugee Crisis Endangers 'Very Idea of Europe' – French Prime Minister
On September 13, Germany introduced border controls amid the ongoing refugee crisis, as more than one million migrants entered the country last year. The scheme has been renewed several times and is expected to be in force until February 13. Then, according to the country's authorities, it will likely be extended for an indefinite period of time.

The particular focus of the initiative has been put on the German-Austrian border. Since mid-September, federal police officers have been working overtime patrolling the area.

"We have more than two million hours overtime," Radek said, adding that about 2,000 officers are being deployed. He also said the police forces are now barely able to carry out other tasks, such as protecting airports, monitoring railway stations and ensuring security on the weekends during football matches.

Radek argued that the planned creation of an additional 3,000 jobs in the next few years won't bring the federal police much help.

"This will help us only in three years, we can't deploy these people right now," Radek explained.

The European Commission earlier stated that Europe is currently facing the biggest immigration crisis since WWII.

22 January 2016, 21:45 GMT3
000000
Open the door wide and free. Those refugees may not just swim across the ocean to get to whatever nation they have in mind. They must set their sights on those countries that supported them financially and militarily to go to war. Or at least, want to use that country as springboard to get to the third world that encourages them to take up arms and fight Assad. My sixty five years on this planet, hardly seen a large group of refugees who have nothing to do with the war but walk a away from their own country to face uncertainty in another country.
peaceactivist2
22 January 2016, 22:11 GMT
000000
Newsfeed
0
New firstOld first
loader
LIVE
Заголовок открываемого материала
Access to the chat has been blocked for violating the rules . You will be able to participate again through:∞. If you do not agree with the blocking, please use the feedback form
The discussion is closed. You can participate in the discussion within 24 hours after the publication of the article.
To participate in the discussion
log in or register
loader
Chats
Заголовок открываемого материала
Worldwide
InternationalEnglishEnglishMundoEspañolSpanish
Europe
DeutschlandDeutschGermanFranceFrançaisFrenchΕλλάδαΕλληνικάGreekItaliaItalianoItalianČeská republikaČeštinaCzechPolskaPolskiPolishСрбиjаСрпскиSerbianLatvijaLatviešuLatvianLietuvaLietuviųLithuanianMoldovaMoldoveneascăMoldavianБеларусьБеларускiBelarusian
Transcaucasia
ԱրմենիաՀայերենArmenianАҧсныАҧсышәалаAbkhazХуссар ИрыстонИронауОssetianსაქართველოქართულიGeorgianAzərbaycanАzərbaycancaAzerbaijani
Middle East
Sputnik عربيArabicArabicTürkiyeTürkçeTurkishSputnik ایرانPersianPersianSputnik افغانستانDariDari
Central Asia
ҚазақстанҚазақ тіліKazakhКыргызстанКыргызчаKyrgyzOʻzbekistonЎзбекчаUzbekТоҷикистонТоҷикӣTajik
East & Southeast Asia
Việt NamTiếng ViệtVietnamese日本日本語Japanese中国中文Chinese
South America
BrasilPortuguêsPortuguese
NewsfeedBreaking
YesterdayChina Pushes Vaccination Program Ahead as Lanzhou Placed in Lockdown to Contain New Covid Cases
YesterdayAre Manchester United and Antonio Conte a Good Fit?
YesterdayAngry Emojis Only!
YesterdayThe Spice Must Flow: ‘Dune’ Sequel Greenlit After Successful Opening Weekend at US Box Office
YesterdayRightwing Chilean Newspaper Sparks Outrage after Tribute Article to Hermann Goring
YesterdayUS Intelligence Unit Seeks Way to Detect Radio Signals That Indicate Data Breaches
YesterdayUS Senate Confirms Ex-Republican Senator to Be Next Ambassador to Turkey
YesterdayUnited Airlines Pilots, Workers Refusing to Fly With Unvaccinated Colleagues, Court Docs Reveal
YesterdayEx-Lehman Brothers Exec Predicts 3 More Years of Inflation, Tech Stocks to 'Get Crushed'
YesterdayBacking for Increased US Police Budgets Surges to 47% Amid Rise in Violent Crime – Poll
YesterdayAt Least 6 Killed, 10 Injured in Attack by IS Militants in Eastern Iraq - Source
YesterdaySection of Biden's Infrastructure Bill for Fighting Climate Change Reportedly Tops $500 Billion
YesterdayManchester United Hierarchy Reportedly Split on Ole Gunnar Solskjaer’s Future
YesterdayTexas Becomes Latest US State to Pass Anti-LGBTQ Law, Banning Trans Girls From Female Sports
YesterdayLe Pen Says Hungary's Orban Backs Launch of Hard-Right Alliance in Coming Months
YesterdayInvestors George Soros, Reid Hoffman Help Launch Group to Combat Online Disinformation
YesterdayChicago City Council Prepared to Vote on $31 Million Program to Assist Low-Income Households
YesterdayMedia Reveals Photos of Alleged Arrested Mossad Agents in Turkey
YesterdayCould Russia's Zeus TEM Be a Gamechanger for India's Space Ambitions?
YesterdayScientists Spot Signs of First Planet Outside Milky Way