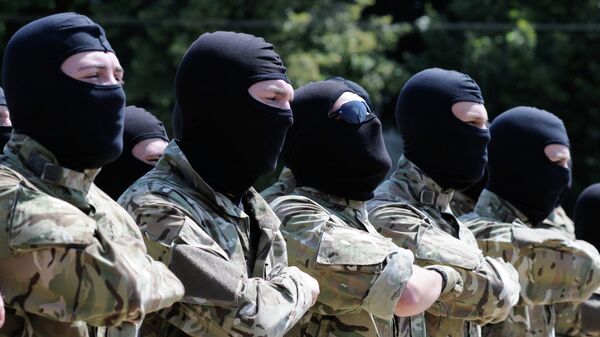 A group of Ukrainian nationalists have threatened to cause chaos in the Netherlands if Dutch citizens will vote against the EU-Ukraine Association Agreement this coming April, the French newspaper Les Echos reported.

A video appeared on the Internet in which the alleged members of the Ukrainian ultra-nationalist organization Azov told Dutch citizens that if they want to avoid violence in the Netherlands they should not vote against the association agreement with Kiev.

"Dear Dutchmen, don't you dare to go against Ukraine, it will end very bad for you. We'll bring chaos not only in your brains, but in your very homes. You'll see to regret this,," a masked man said in the video.

The man also said that Azov has its fighters in the Netherlands, who are ready to carry out any orders their leaders would tell them to do.

"We'll find you everywhere: in movie [theaters], at work, in your bedroom, public transport," the Ukrainian radicals threatened Dutch residents.

Ukrainian authorities said the video was fabricated to discredit the country in the eyes of Europeans before the upcoming referendum.

Azov Militants Stage Protest in Kiev
Fabricated or not, the video has spooked many Europeans who have begun to second guess whether getting too chummy with Ukraine might end well for the EU. Nobody in Europe wants to see Ukrainian radicals carrying out potential terrorist acts like they said they would in the video.

The referendum itself will be held on April 6. Dutch voters will be given a simple question to answer: "Do you support or oppose the EU-Ukraine Association Agreement?"

Many people in the Netherlands, especially those who are skeptical about the whole EU idea, will vote "No" in the upcoming referendum to avoid the mass influx of Ukrainians into the EU that is already full with migrants, Les Echos said.

If successfully passed, the EU-Ukraine Association Agreement would establish a political and economic association between the two parties. The deal was signed after the coup-imposed Ukrainian government came to power in 2014. The accord specifically seeks to create a free trade zone between Ukraine and the 28-nation bloc.

Although the deal doesn't mean Ukraine would join the EU immediately, Euroskeptics fear that the agreement would make Kiev one step closer becoming a EU member in the future, the French newspaper said.