On the Offensive: Russia, Syria ‘Drive Islamists Into Corner' 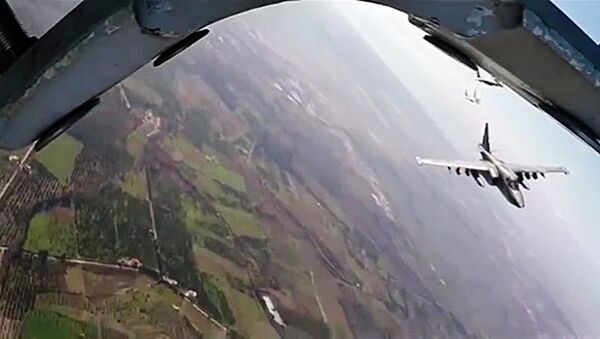 With the support of the Russian Air Forces, the Syrian army managed to surround the stronghold of terrorists on the border with Turkey and cut them off from supplies, "driving Islamists into the corner," a German newspaper reported.

Russia’s Air Assault in Syria Forces US, Turkey to Scale Back Ambitions
The radical Islamist group Al-Nusra Front and the Free Syrian Army (FSA) were completely defeated in this area, the newspaper wrote, citing the website Almasdarnews.

The victory is of great importance to reconquer the Free Syrian Army's stronghold of Al-Rabi'yah located in the northern part of Latakia province. Moreover, recapturing the two mountaintops will help the Syrian army to completely seal off the border area with Turkey and fully cut off the terrorists from supplies.

Russia repeatedly called to take action against all terrorist groups in Syria, including the US-backed Al-Nusra Front, which is part of al-Qaeda. Earlier, a former Indian ambassador to Syria had confirmed that Al-Nusra Front was one of the main forces instigating the war in Syria.

Earlier, the 104th brigade of the Syrian Air Force had reportedly killed Daesh top commander Abu Hamza Al-Ansari, who was responsible for abducting and killing hundreds of civilians in the Syrian province of Deir Ez-Zor.