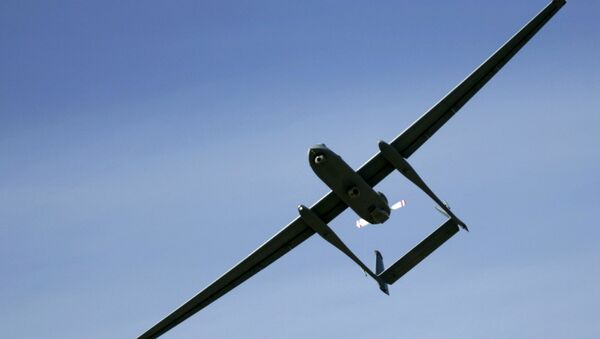 © AP Photo / Ariel Schalit, File
Subscribe
International
India
Africa
After the failure of a costly project equipping large airplanes with lasers in 2012, the Pentagon has now returned to the idea of destroying enemy targets with powerful beams, but intends to mount the weapons on lightweight high-altitude drones.

Killer US Laser Drones Could be a Reality in 2017
The Missile Defense Agency (MDA) seeks to use airborne lasers on small unmanned air vehicles (SUAV) to zap enemy ballistic missiles.

According to MDA director Vice Admiral James Syring, new laser technology must be developed in the next three years to study if drone-mounted lasers are feasible.

“We have significantly ramped up our program in terms of investment and talking about […] what else needs to be done to mature this capability,” Defense One reported, citing Syring as saying.

Under Pentagon plans, drones equipped with lasers will fly at altitudes above 65,000 feet, where they won’t be affected by weather conditions. They will stay aloft for weeks at a time, loitering above missile sites and shooting down projectiles as soon as they’re launched.

The Pentagon has long been developing an airborne laser weapon to intercept ballistic missiles.

Science & Tech
New ‘Death Ray’ for Drones Can Stealthily Blast Away UAVs From Mile Away
Previous attempts to create an Airborne Laser Test Bed (ALTB) using a Boeing 747 were shut down four years ago after 16 years of development. The US Department of Defense spent about $5 billion trying to fit a workable laser weapon into the nose of the plane. Despite some successful tests in 2010, the project was eventually pronounced too expensive and impractical.

Among key problems were that an ALTB had a short range, needing to come close to targets, thus becoming vulnerable to air or ground attack.

"The reality is that you would need a laser something like 20 to 30 times more powerful than the chemical laser in the plane right now to be able to get any distance from the launch site to fire," Ars Technica reported, citing a 2009 statement by former Secretary of Defense Robert Gates.

Syring notes that chemical-powered lasers are “hard to maintain.” Following every shot they need to be refueled. Support equipment weighs as much as six large SUVs. And each 747 aloft required a fighter jet for cover and attendant tanker aircraft.

High-Precision Laser Weapon Systems for US Navy to Be Developed by Boeing
Still, Syring believes the concept is workable.

The Pentagon has now focused on creating a more powerful, and significantly lighter weight laser.

“If you can balance that range, altitude, power and number of boosters you need to defeat to help augment our kinetic capability, you’re thinking about the problem exactly right,” Syring asserted.