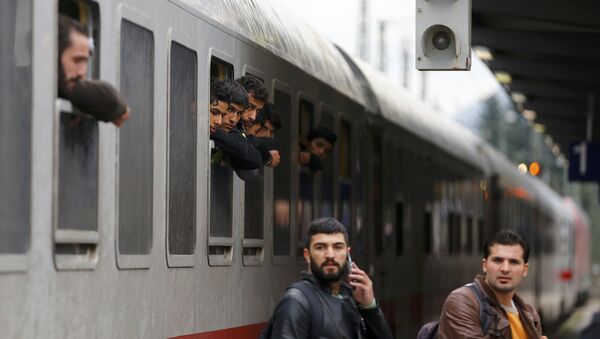 © REUTERS / Dominic Ebenbichler
Subscribe
A 20-year-old woman died after being pushed in front of a train at the Ernst-Reuter-Platz underground subway station in Berlin on Tuesday night.

Scores of Kurdish Migrants Return Home After Disappointment in Europe
The shocking incident took place when the young woman was standing on the platform waiting for her train and she was pushed infront of an oncoming train by a 28-year-old Hamburg man born of Iranian descent. After he pushed the woman, shocked witnesses ran toward him and held him back so that he couldn't escape.

The Swedish press reported the tragic incident in no specific details. Meanwhile, German newspaper Berliner Zeitung reported that the offender was said to have been in Berlin only a few hours. He had come from Hamburg and was seeking a place to stay in Berlin.

According to the reports he was denied a bed, because the hotel was fully booked so he went to the subway station.

Several witnesses told the newspaper that they saw the man at the station, just a few moments before he pushed the young woman so that she ended up on the tracks right in front of the train. The woman died instantly due to her injuries.

“We can confirm that the woman was living in Germany and that she had both German and Swedish citizenships,” Veronica Nordlund at the Foreign Ministry's press office told Swedish website DN.

According to the German newspaper the man and his victim were strangers.

The 28-year-old offender was under some sort of surveillance earlier before the tragic event, Berliner Zeitung reported.

According to Spiegel, quoting Martin Steltner, the Berlin public prosecutor had sentenced the man back in 2002 for violent crimes in Hamburg.

A police spokesman in Berlin said that the motive of the act was not clear. Images from surveillance cameras at the site will be uncovered shortly. The event was classified as murder and the man was transferred to a hospital for psychiatric treatment.

000000
Popular comments
She wasn't murdered! She was "Culturally Enriched". Stop your Islamaphobic propaganda!