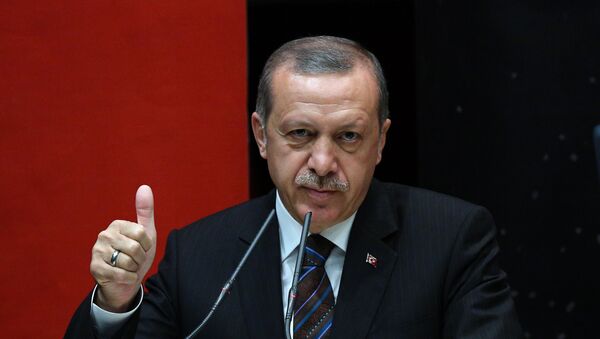 Recep Erdogan is converting Turkey into a police state by granting sweeping powers to the National Intelligence Organization (MIT) and cracking down on independent journalism and political opposition; in this light Erdogan's reference to Hitler's Germany as a presidential system model comes as no surprise.

"Last year, Recep Tayyip Erdogan's Justice and Development Party (or AKP) took steps towards converting the Republic of Turkey into a just another typical Middle-Eastern 'Mukhabarat state,' a state where official intelligence services are busy keeping taps on the people while developing all kinds of nefarious cross-border activities embroiling the country in all kinds of dodgy affairs and/or relations," Dr. Erimtan writes in his recent article for New Eastern Outlook.

Turkish Troops Entered Syria - Kurdish Media
The scholar calls attention to Turkey's legislation that provides MIT with sweeping powers. "The National Intelligence Organization has really been able to act with impunity since the adoption of Law Nr. 6532 [on April 26, 2014] with arbitrary phone tapping constituting but tip of the iceberg of its activities," Erimtan notes.

He adds that despite protests from Erdogan's opposition Turkey's Constitutional Court "all but upheld the organization's status" after reviewing the controversial law.

Erimtan emphasizes that commenting on the issue member of the opposition Republican People's Party (CHP) Ahmet Toptas noted: "Our real worry was that Turkey would be turned into an intelligence state."

Needless to say, the Erdogan regime and MIT are using their impunity to their own advantage.

After the Turkish intelligence agency was spotted smuggling arms to Islamists in Syria by the opposition daily Cumhuriyet, the daily's editor-in-chief Can Dundar and Ankara bureau chief Erdem Gul were arrested and charged with "treason" and "espionage."

Turkish Charade: Why Did Daesh Carry Out Suicide Bombing in Istanbul?
In his latest interview from prison Can Dundar told The Guardian that Recep Tayyip Erdogan "consolidated absolute power by establishing a police force of epic proportions and came in total control of the judiciary system."

The journalist lambasted Brussels for rapprochement between the EU and Erdogan while turning a blind eye to Ankara's "fascist government."

But that is not all: in mid-December 2015 Turkish MP Eren Erdem shed some light on Ankara's unwillingness to investigative Turkish supply routes of deadly sarin gas ingredients to Daesh (Islamic State/ISIL) then known as al-Qaeda in Iraq in 2013.

"There is data in this indictment. Chemical weapon materials are being brought to Turkey and being put together in Syria in camps of ISIS [Daesh] which was known as Iraqi al-Qaeda during that time," Erdem said in an interview with RT broadcaster.

The investigation revealed that a number of Turkish citizens had been involved in negotiations over sarin ingredients deliveries with al-Qaeda in Iraq's militant Hayyam Kasap. However, despite all evidence 13 suspects related to the case were released by Turkish authorities.

Predictably, after giving the interview Erdem was accused of treason, Erimtan continues.

The Turkish scholar quotes Recep Erdogan's statement regarding the matter: "[t]hose accusing their own state of selling chemical weapons on a foreign state's [television] channel, they are becoming party to a ring of treason… What kind of treason is this? How can you accuse [us] of delivering sarin gas to a terror state like Syria?" (17 December 2015).

Blame Game: Erdogan Hunts for Enemies Within and Without as Turkey Suffers
Simultaneously, Recep Erdogan and his clan have no scruples about selling stolen Iraqi and Syrian oil, extracted by Daesh.

In a pathetic gesture, the Turkish President pledged to resign if his fault was proven. However, despite the Russian Defense Ministry presenting ample evidence of Ankara's involvement in illicit oil business with Daesh, Erdogan did not keep his promise.

Given the Turkish President's crackdown on journalism and independent investigators as well as brazen impunity of his controversial oil machinations, Erdogan's reference to Hitler's Germany as a presidential system model is by no means a slip of the tongue.

"In the end, one can only say that Recep Tayyip Erdogan… and his party apparatus appear to have transformed the country's National Intelligence Organization (MIT) into a personal Praetorian Guard to be used (or abused) in the pursuit of various arguably unsavory policy aims and 'state secrets'," Erimtan concludes.