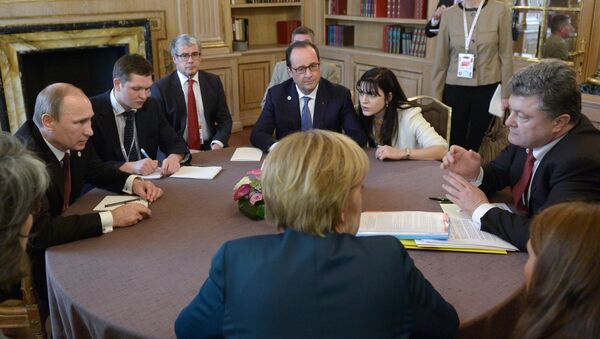 Surkov and Nuland held talks last week in Russia's westernmost city of Kaliningrad. Following the talks, Surkov said that some topics put forward during the meeting, including constitutional reform in Ukraine, might be discussed at a meeting of the Normandy Four, comprising Russia, Ukraine, France and Germany.

"Regarding these talks, in this case we are talking about dialogue at the expert level between Moscow and Washington. As you know, the United States is not party to the Normandy process, at the same time, of course everyone is interested in the United States having the opportunity to receive firsthand information, [despite] not being a member of the Normandy process," Peskov told reporters.

Kiev authorities launched a military operation against independence militias in Ukraine’s eastern Donbas region in April 2014. The confrontation has claimed over 9,000 lives, according to UN estimates.

The Normandy Four was created in 2014 to secure a peaceful settlement to the conflict in eastern Ukraine. In February 2015, the quartet's leaders brokered the Minsk peace deal, later signed by representatives of Kiev and the militias of eastern Ukraine.